So the other day I did the vanity Google. Admit it.  You have, too.

I don’t get past my first name before Google offers auto-completes like Al Jazeera, Al Pacino, and of course…  Al Capone.  But then right after that, Al Cambronne pops up pretty quickly.  That’s me.

And if I simply search for “Cambronne?”  There’s apparently a restaurant supply company called Cambro, and as long as I can remember I’ve been seeing their name on the bottom of those cheap red plastic glasses at pizza parlors. But immediately thereafter, up pops my name—Cambronne, a surname I share on the internet with a distant relative at a Minneapolis law firm, a cousin who’s an artist working in metal, and various other relatives who mostly live here in the Midwestern U.S.

All these places, it turns out, are named after Pierre Cambronne, a heroic general of Napoleon’s who may or may not be an ancestor of mine.  He fought and was wounded at the battle of Waterloo in 1815, and may or may not have said something quite noble, quite obscene, or both.  The Battle of Waterloo, of course, gave us the idiom “to meet one’s Waterloo,” and that’s where Pierre Cambronne met his.

According to one newspaper account, when asked to surrender he replied “The Guard dies. 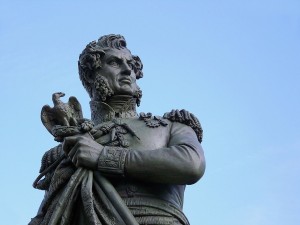 It does not surrender.” After his death, these words were carved into the base of his statue.  But since he surrendered at Waterloo, married the Scottish nurse who cared for him after his capture, retired to his home town of Nantes, and lived happily for 27 more years until dying there in 1842, more appropriate words might have been “The guard surrenders. It does not die.”

There is, however, another version of the story that’s gained much greater traction over the last two centuries.  Legend has it that when asked to surrender Cambronne replied with more colorful language that was not later carved into the base of his statue.  According to most sources, his defiant reply was brief and to the point: “Merde!”  (“Shit!”).  Even today, in polite company the French often use the euphemism “le mot de Cambronne” (the word of Cambronne).  Although this is the version of the story told by Victor Hugo in Les Miserables, I’ve also heard vague rumors that Cambronne may have used even stronger language at Waterloo.

At any rate, on the rare occasions when I introduce myself to anyone from France who stayed awake in history class, they are always delighted to learn of my last name.  I tell them I’m not sure, but yes, I might be related to Pierre.  Yes, probably.  I’m pretty sure.

The moral of the story: There’s nothing like a good story. 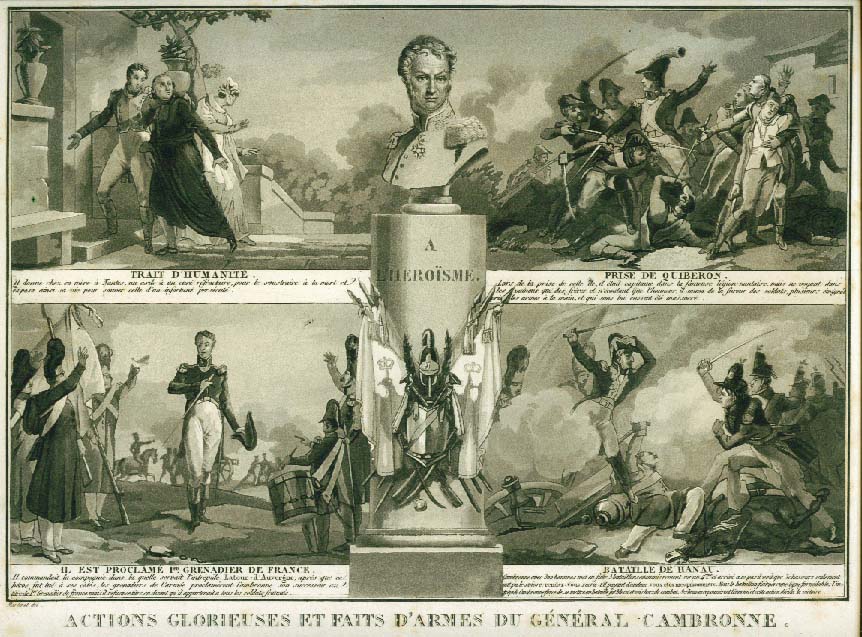 It’s time for a special Thanksgiving post.  Since I’ve been writing a lot about deer lately, I suppose this could have been a timely history lesson about how turkey wasn’t even on the menu at that first Thanksgiving.  The main course was in fact venison.  Which is true, and the “story behind that story” gives us fresh insights into American history.  But more about that another time.

Instead, here’s a post about being thankful.  First, of course, for deer—even though botanists, ecologists, and foresters have taught me and my readers a great deal about how too many of them in one place can be a mixed blessing.  Deer are wondrous creatures, and their mere presence makes the woods feel wilder.  They have also provided us with a few dinners, and writing about them has even paid a couple bills.

For turkeys, especially of the wild variety—a few of which occasionally wander through our neighborhood.  For being far to the north and far upstream of the “farms” where those other turkeys come from.  (Sorry.  This was supposed to be an unrelentingly positive post.  I’ll get back on track in a moment here.  Please continue enjoying your leftover turkey sandwich.)

For all the reviewers, columnists, and bloggers who read DEERLAND, enjoyed it, and helped to spread the word.  For the TV and radio hosts who patiently coached me through my earliest interviews—and then later, through the magic of editing, made me sound incredibly fluent and articulate.  Thank you.

For everyone else who read DEERLAND, enjoyed it, and is telling their friends about it.  And even for readers who didn’t enjoy DEERLAND—usually because it included new facts about deer that didn’t fit with their existing beliefs.  I heard from a few of those people, too.  (Interestingly, roughly half were hunters and half were anti-hunting vegans.  People of all sorts have strong feelings about deer.) You can’t please everyone, and those occasional pieces of genuine hate mail helped confirm I hadn’t written a bland book.  For that, and for all the footnotes and rock-solid science I made sure to include, I am hugely thankful.

For tremendously supportive fellow writers and bloggers.  For a great agent who has given me wise counsel, supportive guidance, and tough literary love when I needed it.  For the talented, hard-working editors, publicists, and salespeople I’ve had the privilege of working with at two different publishers.  For all these people, I am deeply thankful.

I should also remember all the non-literary reasons I have to be thankful this Thanksgiving. A loving wife who’s the best thing that ever happened to me.  Our health.  A roof over our heads, and a great place to live.  Wonderful friends and neighbors.  And more.

Although I can often be a real glass-half-empty kind of guy, sitting down to write this blog post has reminded me that I have a lot for which to be thankful.  Every now and then it’s good to pause and count one’s blessings. Glad I did that.  I highly recommend it.

So…  Here’s to the deer, and Happy Thanksgiving! 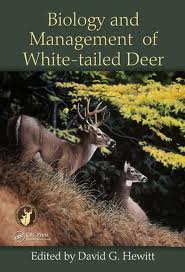 At only 686 pages, compared to its predecessor’s 870 pages, it’s much shorter—but only in the same way that recent Cabela’s catalogs have slimmed down from 1,288 pages to “only” 908 pages.  And despite its cover price of $119.95, it’s currently available on Amazon

That’s not cheap.  Still, if your interest in deer extends beyond an annual weekend of hunting or an occasional morning spent cursing the midnight marauders that pruned your hostas, then this book might be worth a look.  And it’s not just for wildlife biologists or the truly deer-obsessed.  It’s also worth owning if you’re a curious amateur who wants to dig deeper and learn a little more.

If you’re a hunter, you probably already own enough books about how to hunt deer.  If you’re a watcher, you probably own enough deer picture books to cover your coffee table.  For what you’d spend on a couple more of them, you could instead buy this volume.  A few more boxes of ammo, a few more sacks of “deer corn” (which you shouldn’t be feeding those deer anyway), half a pair of mediocre binoculars…  You get the idea.

Co-published with the Quality Deer Management Association (QDMA), Biology and Management of White-tailed Deer includes 21 chapters divided into the following topics: The Past (just one introductory chapter on taxonomy, evolutionary history, and distribution), Biology (nine chapters on a variety of topics ranging from “Antlers” to “Spatial Use of Landscapes”), Management (ten chapters ranging from “Management on Private Property” to “Managing White-tailed Deer: Exurban, Suburban, and Urban Environments), and The Future (just one closing chapter).

By the way…  By now you may have noticed something unfamiliar about the spelling and hyphenation of your favorite animal.  Modern usage has settled on the consensus of “whitetail deer,” as in the magazine titles Quality Whitetails or Whitetails Unlimited.  In a scientific context, however, the animal remains “white-tailed deer.”  In a title, the W and D are capitalized and the T is not.  You get used to it after a while.

As I noted in a review of this book’s 1984 predecessor, my DEERLAND research involved hundreds of journal articles and dozens of other books besides these two.  I also did a fair amount of primary research by interviewing the top experts in their fields.  (And when I say “in their fields,” that wasn’t always a figure of speech.)

With other DEERLAND sources, I headed out in the woods.  With botanists, foresters, and wildlife biologists, I hiked around and asked lots of questions.  With one urban bowhunter, I climbed about 20 feet up an aspen that, once the late afternoon wind came up, felt like it should have been slightly larger in diameter to support the two of us.  To get my roadkill story, I spent an entire shift riding around with a State Trooper.  (But at least, unlike one of our guests that night, I got to sit in the front seat.)

So don’t get me wrong.  I did lots of other research.  But Biology and Management of White-tailed Deer, along with a number of other books, provided important background.

And if you happen to be a curious amateur deer enthusiast, then you’ll find this book both informative and entertaining.  There won’t be much on TV next winter, and Biology and Management of White-tailed Deer

will keep you occupied for several long winter evenings.  Once you’ve finished it, you’ll own an invaluable reference work.  So for you, it just might be worth every penny.