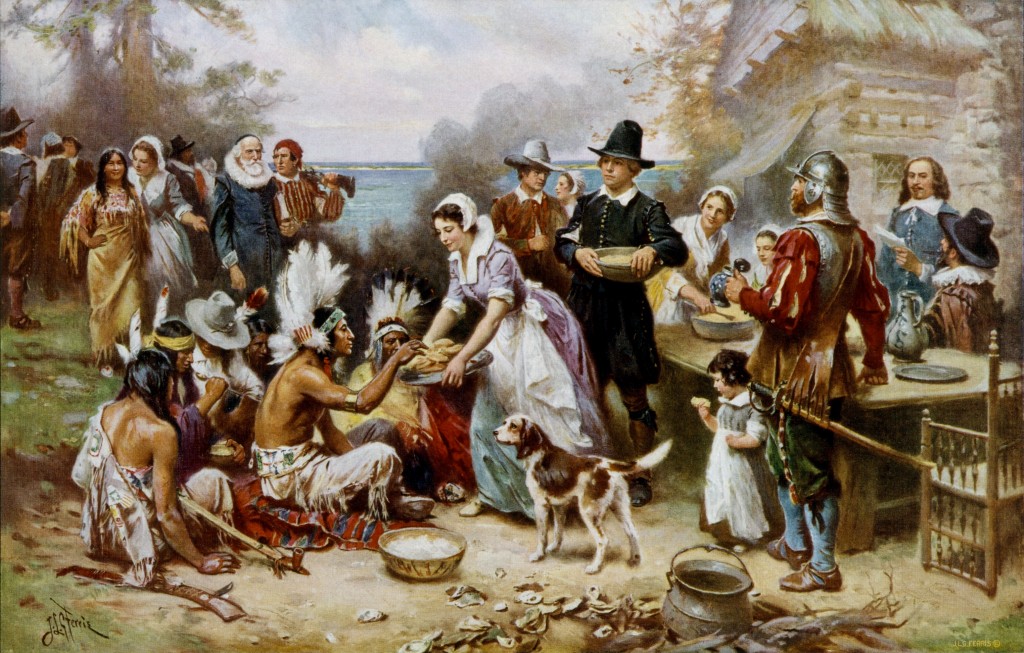 It wasn’t easy being a Pilgrim. After the Mayflower arrived at Plymouth Rock in December of 1620, nearly half its 102 passengers died during their first winter ashore.  Only 53 scurvy-ridden immigrants survived until the next autumn; their number included only four adult women.  Most of the colonists were in poor health, and few of them were skilled farmers or hunters. Fortunately, their new neighbors were glad to share a little squash and venison now and then.

With good reason, these and other colonists were impressed by Native Americans’ hunting skills. One in Virginia describes the Roanokes “… being secretly hidden among high reeds where oftentimes they find the deere asleep and so kill them.”  John Smith reported that “When they have shot a deare by land, they follow him like blood hounds by the blood and straine, and oftentimes so take them.”

The Pilgrims’ new neighbors, the area’s original inhabitants, were the Wampanoag.  Like most tribes, they were competent hunters and farmers.  But somehow that doesn’t quite fit with what most of us learned in school about who catered the first Thanksgiving dinner party.

In his book Lies My Teacher Told Me, historian James Loewen describes how “Our archetypal image of the first Thanksgiving portrays the groaning boards in the woods, with the Pilgrims in their starched Sunday best and the almost naked Indian guests. Thanksgiving silliness reaches some sort of zenith in the handouts that school children have carried home for decades, with captions like, ‘They served pumpkins and turkeys and corn and squash. The Indians had never seen such a feast!’ When his son brought home this ‘information’ from his New Hampshire elementary school, Native American novelist Michael Dorris pointed out ‘the Pilgrims had literally never seen such a feast, since all foods mentioned are exclusively indigenous to the Americas and had been provided by [or with the aid of] the local tribe.’”

For over a century, our mental pictures of the first Thanksgiving have been reinforced by actual pictures.  America’s most well-known image of The First Thanksgiving is the 1899 oil painting of that title by Jean Leon Gerome Ferris.  It shows a crowd of well-fed, rosy-cheeked pilgrims offering heaping platters of food to a half-dozen Indians sitting cross-legged on the ground.  All wear clothing more typical of that worn by Indians of the Great Plains.  A 1914 oil painting by Jennie A. Brownscombe shows a similar scene, this time with most of the Indians sitting on the grass in the distant background. In both paintings, half-naked Indians seem noticeably under-dressed for late November in Massachusetts.

Both paintings suggest that dinner was provided by generous Pilgrims.  The truth, however, was somewhat different, and the Indians must have viewed the Pilgrims as we would that bachelor uncle who always arrives at Thanksgiving dinner with a bag of chips and a jar of dill pickles.  But since the three-day feast was attended by 53 pilgrims and around 90 Indians, maybe it’s only fair that the Indians brought most of the food—and also most of the choicest dishes.

Which brings us to the second-biggest myth about that first Thanksgiving—the menu itself.  It featured no potatoes, either mashed or sweet. No green beans baked with cream of mushroom soup and crispy onions.  No pumpkin pie or squash with marshmallows on top—but probably roast or boiled pumpkin and squash, most of it provided by the Indians.  No stuffing, and probably no turkey, either.

The most reliable written account of the occasion is from Edward Winslow. In it, he makes no mention of turkey. But when writing about wild game, Winslow and his contemporaries almost always named waterfowl and turkey specifically—probably because each bird was large enough to provide a solid meal.  He mentions one outing, for example, when “wee got three fat geese and six ducks to our supper, which we eate with soldiers stomachs, for we had eaten little all that day…”  On another trip he and his companions remained hungry: “…wee saw great flockes of wild geese and duckes, but they were very fearefull of us.”

When writing of the first Thanksgiving, however, Winslow only mentions some sort of generic “fowle” that was most likely heath hen. This two-pound bird, a relative of the prairie chicken, was once quite common along the entire eastern seaboard. Because they were easy to hunt and tasted like chicken, they are now extinct.

By 1621, their fate was already sealed.  Writes Winslow: “Our harvest being gotten in, our governour sent foure men on fowling, that so we might after a special manner rejoice together after we had gathered the fruits of our labours. They foure in one day killed as much fowle as, with a little helpe beside, served the company almost a weeke.”  Figure enough birds to feed 53 hungry Pilgrims for a week, and maybe even a few of the 90 or so Indians who joined them for the party, and that’s a lot of “fowle.”

Besides Winslow’s account, the only other description of that first Thanksgiving is from William Bradford, who does indeed mention turkeys. But Bradford, unlike Winslow, was writing about his recollections 20 years after the fact. He appears to have made a number of other adjustments to the day’s menu, and he also put a far more positive spin on the Pilgrims’ diet during the months before and after.  Knowing his account will be questioned, he seems a little defensive: “Besides, they had about a peck a meal a week to a person, or now since harvest, Indian corn to the proportion. Which made many afterwards write so largely of their plenty here to their friends in England, which were not feigned but true reports.”

Winslow, meanwhile, notes that the Indians “went out and killed five Deere which they brought to the Plantacion, and bestowed on our Governour, and upon the Captain, and others.”  So at that first Thanksgiving in 1621, it seems likely that turkey wasn’t even on the menu. One thing is certain, however. The main course was venison.

Then, as now, it would have been delicious.  The Pilgrims had never seen such a feast. 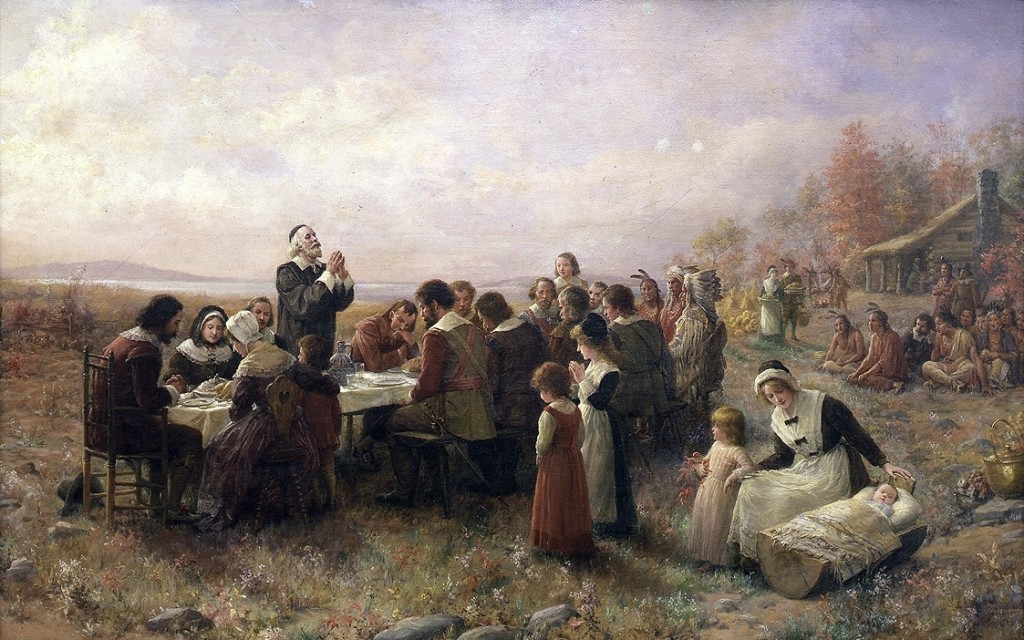 3 thoughts on “At the first Thanksgiving, the Pilgrims had never seen such a feast.”