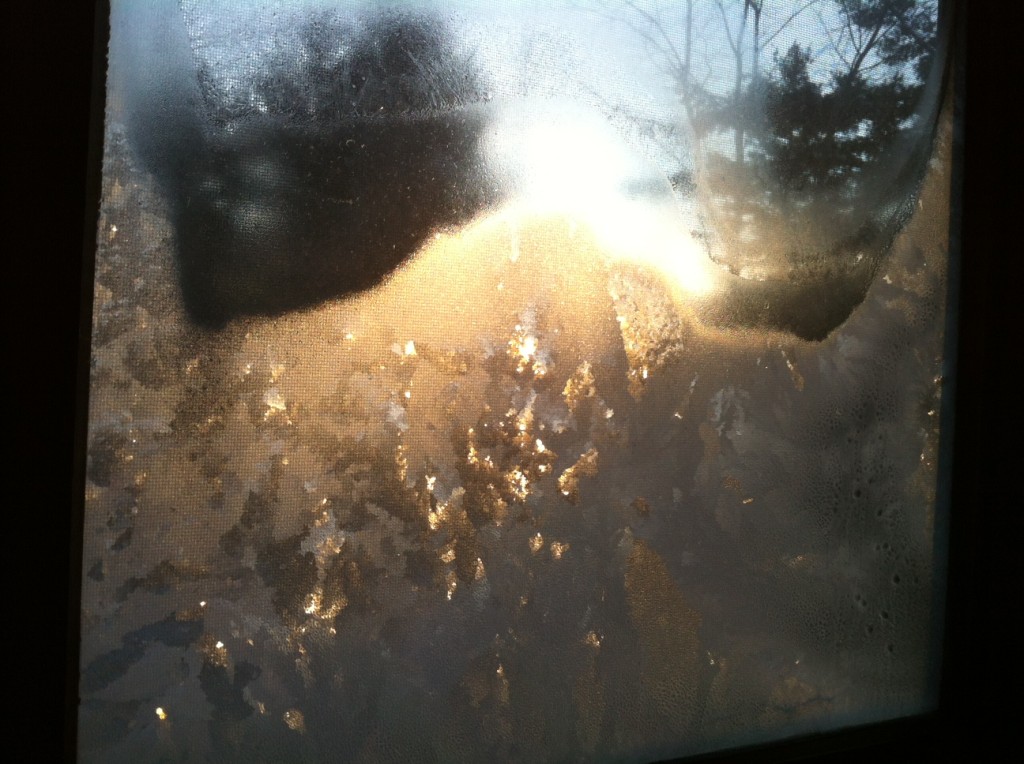 This old house doesn’t yet have modern, triple-pane windows.  Lately some mornings we’ve discovered frost on the inside.  I took this photo the other day at sunrise when it was -31° F.  It was about the same temperature this morning.

Here in northern Wisconsin, this is going to be a tough winter for deer—and also for other wildlife.  For a rough measure of just how tough, wildlife biologists use something called a Winter Severity Index (WSI).  States use different formulas, but Wisconsin uses a simple one:  Every day with more than 18” of snow on the ground gets a point.  So does every day when the temperature dips below 0° F.  A day when both happens?  That means two points.  Then at the end of the winter, add them all up.

Obviously, this formula doesn’t tell the whole story.  A crusty 17” of snow, for example, is more of a hardship for wildlife than a fluffy 19”.  And a calm night when the temperature briefly dips to 0° F isn’t as bad as a windy night when it falls to -25° F and stays there.  And I have to wonder if we should maybe add one more point when the daytime high doesn’t get above 0° F. (That would mean today gets three points.)

At 43 official stations here in northern Wisconsin, plus a few more downstate, these readings are recorded from December 1 through April 30.  At the unofficial station in my front yard, we’ve been racking up two points a day pretty much every day such December 1.  By my highly unofficial calculations, we’re already most of the way through “moderate.”  We should be hitting “severe” in another week or two, and it’s a long time until May 1.

In winter a deer’s primary metabolic strategy is to find thermal cover under thick conifers, stay bedded down, and expend as little energy as possible.  They live on stored fat, and they eat very little.  This year some individual deer may not live to see May Day.  But as a species, they’ve survived around four million cold winters.  Deer are survivors.

4 thoughts on “A Measurably Severe Winter”