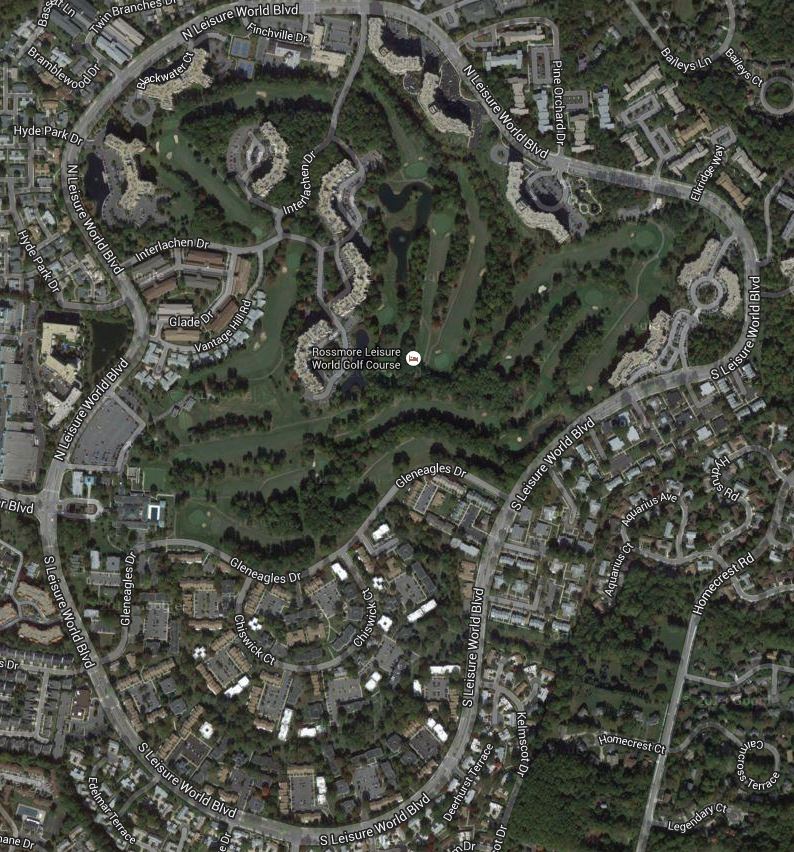 Since the release of DEERLAND, I’ve been talking with reviewers, reporters, and all sorts of interesting people from across the U.S. and Canada—from all across Deerland, you might say.  One especially memorable inquiry came from Martha Robinson of Leisure World News.  When I first heard the name of her publication, I was a little puzzled.  Here’s the story.

Leisure World is a gated retirement community in Silver Spring, Maryland.  In the photo above, it’s the area encircled by Leisure World Boulevard.  If you’re a deer hunter who uses aerials to scout for hunting spots, you’d probably guess from this photo that Leisure World is not a good place to look for deer.  You would be wrong.

Located just outside Washington, D.C., Leisure World covers only 1.1 square miles.  It has a golf course, restaurants, shopping, a fitness center, a library, several high-rise apartment buildings, hundreds of single-family homes, 8,500 humans, and over 50 deer.  That would be a lot of deer per square mile anywhere, but much of Leisure World’s one square mile is covered with pavement and buildings.

That’s even more true, however, for the terrain that lays just outside Leisure World Boulevard.  And although there’s a $100 fine at Leisure World for feeding deer, I’m told that hasn’t stopped everyone.  The deer, as usual, have come for the corn and stayed for the salad.  I haven’t been there, but I’ve seen photos in which the underbrush is missing and there’s a clearly visible browse line.  Deer are also munching away at gardens and landscaping.  Deer-vehicle crashes are becoming more frequent.

The community has formed a Deer Committee, and one of its members discovered DEERLAND.  They recommended the book to other committee members, and now word is spreading.  Deer, you see, are a topic of special interest at Leisure World.  At times the issue has become quite contentious.  Apparently it’s led to some heated discussions in certain neighborhoods.

The Deer Committee has invited residents to Deer Meetings with panels of deer experts, and has posted a Deer Committee Report on the Leisure World website.  The community is now planning to hire a firm that will remove some of its deer.  A small but vocal minority of residents is opposed to that, and would prefer to experiment with deer birth control.

Unfortunately, as I explain in DEERLAND with plenty of footnotes referencing the latest science, deer birth control is not an easy answer.  It’s expensive, ineffective, and temporary—and that’s for the small percentage of deer we do manage to dart, capture, inject, and safely release.  Even those deer will still be present, still eating, and still darting out onto roadways.  Meanwhile, all their fertile friends will quickly render the entire effort meaningless.  Plus, additional fertile deer will wander in from nearby.

This means the only time deer birth control might be worth considering is if we’re dealing with a small population of tame, habituated deer on an island or isolated peninsula—or perhaps within a small fenced-in area, like a military facility or a gated community.  The fence at Leisure World, however, is not impermeable.  Its biggest gaps are at places deer love to frequent: wooded ravines and hidden creek beds.

And then there are the gates themselves.  Although Leisure World does have gates with round-the-clock security personnel stationed in guardhouses, it doesn’t have deer-proof sets of double prison gates that open and close electronically while drivers wait in between them.  There’s no “airlock for deer.”  Mostly the gates are open, and the guards aren’t prepared to draw their guns on every deer that trots toward them.  During the rut it’s not uncommon for them to see a doe sprint past with a ten-point buck in hot pursuit.  Some days the deer are leaving, some nights they’re returning.

So for Leisure World, deer birth control is not an easy answer.  But in this highly urban environment, neither is hunting.  Meanwhile, for now at least, the deer of Leisure World continue to enjoy a world of leisure.

2 thoughts on “The Deer of Leisure World”