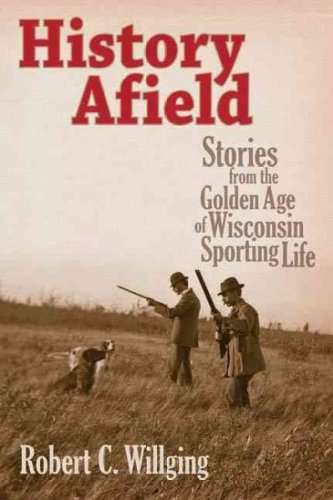 Today, a brief review of Robert C. Willging’s History Afield: Stories from the Golden Age of Wisconsin Sporting Life.  Even if you’re not from Wisconsin, and even if you don’t spend your time hunting, fishing, or heading up north to the resort (old-timey or otherwise), you’ll still find History Afield an entertaining read.  It offers a fascinating glimpse into a time gone by.

(Before going further, I should acknowledge that this is the second time in a row I’ve reviewed a book by someone I know; last time it was Stephen Bodio’s A Sportsman’s Library.  In my defense, I can only quote Bodio’s introduction: “In 1993…  I was accused of writing something nice about someone I knew.  I had, and will.  My argument goes like this: First, the world of outdoor writers, even the larger world of letters, is a small one.  Sometimes I think we all know each other. So, I will not give a good review to a bad book by a friend.  I will bend over backwards to be fair to those with whom I have had disagreements. I will not give a bad review to someone I do not like.”  Words to live by.  But next time I review a book here, I promise it will be one written by a stranger.)

Each chapter of History Afield is a short vignette that stands alone; this would be a great book for readers with short attention spans.  I began by skipping around; every night I sampled a few chapters here and there before bedtime.  But before long I found myself returning to the beginning and reading straight through the 19th and 20th centuries.

In 1875, before catch-and-release had really caught on, one trout fisherman reports “Spite of the day’s conditions, though, we could compute sensations of pleasure to an aggregate of one hundred and forty-five, for the party, those being the figures of joint capture.” The group ate trout for breakfast, lunch, and dinner.  Although most members of the party were dry-fly purists, the bass fisherman among them found that pieces of a passenger pigeon killed earlier worked wonders on the river’s trout.

Fast-forward a century, and the sport of trout fishing had become a bit more genteel—and more popular than ever among the wealthy elite.  Which brings me to History Afield’s chapter “The Summer White House on the Brule.”  This is a story from my own neighborhood, one with which I was already familiar.  Still, I learned several new tidbits.

George W. Bush was often criticized for the amount of time he spent on vacation during his presidency.  But he had nothing on Calvin Coolidge, who spent the entire summer of 1928 trout fishing on the Brule.  He stayed at a friend’s estate, one that still stands; I’ve paddled by it many times.  With him came an entourage of 60 soldiers, 14 house servants, 10 secret service agents, and about 75 reporters.  On rare occasions he traveled the 30 miles or so into Superior, where he’d set up his “summer white house” at the local high school.

(At the east end of Superior, there’s still an establishment known as President’s Liquors.  I’ve heard various rumors about how it got its name.  I’ve also heard rumors that since 1928 at least a dozen other presidents and vice presidents have spent much briefer vacations fishing the Brule in undisclosed locations.  The most recent, it’s rumored, was one with whom it was reportedly safer to fish trout than hunt quail.)

As he does with many of the vignettes in History Afield, Willging ends this one by placing it in a larger context: “After his term expired, Coolidge withdrew from public life. Distressed by the Great Depression, he died in January 1933, a little more than four years after the summer of the White House on the Brule.  Perhaps some foggy recollections of those carefree days spent on the Brule were passing through Coolidge’s mind when, on his deathbed, he uttered his last words: ‘I feel I no longer fit with these times.’”

Other celebrities appearing up at the resort, and sometimes even out on the water or out in the woods, included Bob Hope, Gypsy Rose Lee, and General Dwight D. Eisenhower, up here in northern Wisconsin for well-deserved vacation in the summer of 1946.  He spent the week fishing for muskies with his four brothers (who knew!).  Although he’s vaguely recognizable, the photo otherwise looks like just another snapshot of five proud, smiling geezers at happy hour, posing on the dock with their big fish.  One of the brothers, not Ike, is wearing a pair of really cool sunglasses.

Several of these stories hint at a broader societal trend—shorter vacations and less leisure, even for those with money.  In 1875, wealthy lawyers and businessmen from Chicago reached their favorite fishing spot in the north woods of Wisconsin after a sixteen-hour train ride, two days in a horse-drawn wagon, and a day or two in a birch bark canoe.  But it was all part of the adventure; they were, after all, spending an entire month away from the office.  (It’s worth noting, of course, that average worker of 1875 didn’t have that luxury; it was only in the mid-20th century that the rest of us would begin enjoying vacations in the north woods.)

In a later chapter Willging interviews Tim Ross, a resort owner whose business has been in the family for generations.  Ross tells of families in the 20s and 30s still staying for up to a month.  They’d arrive with an entire staff, including their chauffeur.  But another chapter, “Pastika’s Sport shop: Ninety Years of Muskies and Minnows,” mentions the trend toward shorter drives and shorter vacations.  “Through the 1940s and 1950s, people still came up to Hayward for two weeks or more,” said Pastika.  “But I remember when it began to drop down to a week, and then to three- or four-day weekends.”

Willging writes that “despite catalogs and websites, the shop started by Charlie Pastika in 1921 is still a big draw for tourists in the area, a ‘must-stop’ destination because of its history.”  History Afield was published in 2011, and Pastika’s closed its doors just last year.  Every year, more of the people and places Willging describes are passing; he interviewed many of his sources just in time.

If you’d like a glimpse into their world, you can get your copy of History Afield here