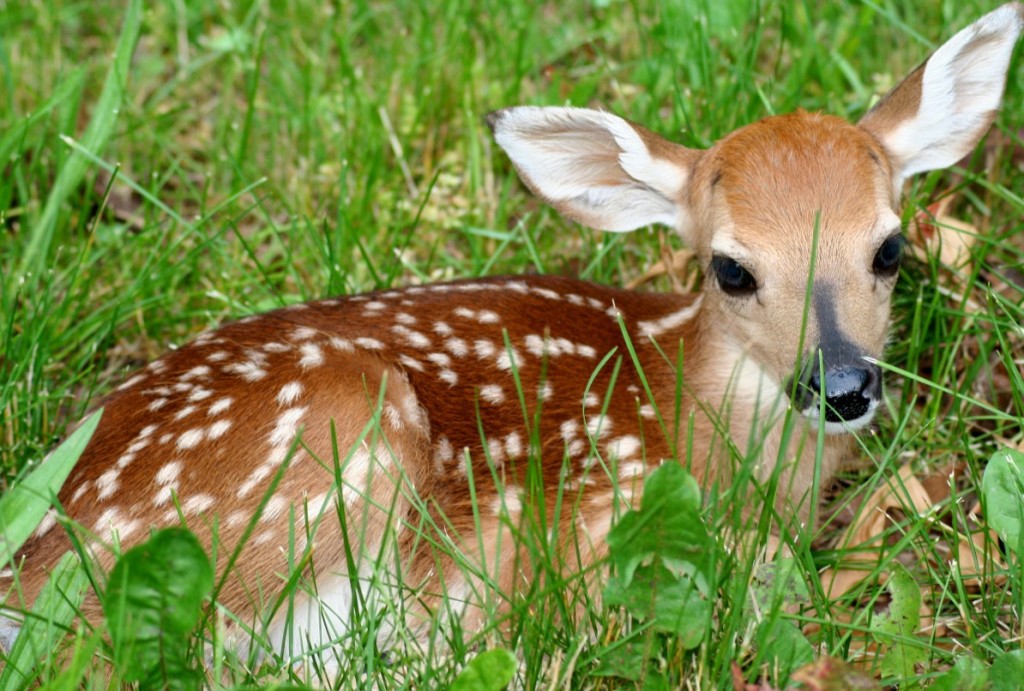 Whether you live in the boonies or the ‘burbs, one thing is certain. Your new neighbors will be arriving soon.  They’ll have four legs, spots, an abundance of cuteness, and a vigilant mother who’s closer than you think.  So please…  don’t “rescue” them.

Every May and June, wildlife agencies and animal rehab centers all over America receive frantic calls from well-intentioned souls asking what they should do next with the whitetail fawn they’ve just rescued.  The answer: As quickly as you can, put it right back where you found it.  Better yet, don’t rescue abandoned fawns in the first place.  With rare exceptions, they’re not abandoned at all.

At birth, whitetail fawns weigh from 5 to 8 pounds. Their mothers immediately lick them clean and consume all traces of the amniotic fluid and afterbirth.  It’s part of the bonding process, and it also reduces the scent trail that would attract insects and predators.  A newborn fawn is almost totally scent-free, and its spots are more than just Disney decoration.  They’re perfect camouflage for a motionless fawn laying hidden in the sun-dappled shadows.

For the first weeks of its life, a fawn is safest if it stays right where it’s put.  Its mother leaves to browse on her own for hours at a time, returning only to nurse.  Although some visits last mere minutes, a doe’s high-protein, high-fat milk allows fawns to gain up to 10 percent of their body weight every day.

Later, they’ll tag along with mom and follow her wherever she goes.  For now, their instinct is to stay hidden and await her return.  Even when danger approaches, their best chance for survival is to stay hidden until it’s past.  The youngest fawns may even allow themselves to be picked up without a struggle.  This doesn’t mean they’re sick or injured, and it definitely doesn’t mean they’re abandoned.

The doe is probably nearby, and its fawn doesn’t need your help.  (Nor does it needs cow’s milk, which is less nutritious, poorly digested, and certain to give it debilitating diarrhea.)  Odds are, your “rescue” be its death sentence.  Most fawns taken to animal rehab centers don’t survive.  To make a deer or any other wild animal a pet is illegal in most states, and it’s a bad idea for lots of other reasons.  The best mother for a baby deer is its own.

As tempting as it might be, just touching that fawn you’ve discovered could increase its risk of being detected by predators that include coyotes, bears, and your neighbor’s dog.  Even your close approach could create a scent trail that leads curious predators to a tasty meal of very tender venison.

(Most experts, however, don’t believe that does will reject their fawns because of human scent; their bond is way too strong.  And the advice to cleanse human scent from a fawn by rubbing it with a towel that’s first been rubbed in grass and leaves?  Probably not all that helpful, considering where else your towel has been—plus the scented detergents and fabric softeners in which you’ve washed it.  A deer’s nose has over 300 million scent receptors.  Bloodhounds have around 220 million, and humans fewer than 5 million.)

When you don’t see the fawn’s mother, that doesn’t mean she’s not there.  You may not see her, but she sees you.  And if you repeatedly observe the fawn in the same general area but haven’t glimpsed its mother for hours or even days, that still doesn’t mean the fawn is abandoned.  Leave it be.

The only possible exceptions?  If you discover a fawn that’s bleeding, has obviously broken limbs, or is crawling with flies or maggots.  Or, if you spot one that refuses to leave the side of a roadkill doe.  Otherwise, leave it where it is.

If you ever encounter a curious fawn that approaches you, the best way to ensure its survival is to help that wild animal stay wild.  If it approaches you without fear or wariness, clap your hands, yell obscenities—or, if you prefer, the word “venison”—at the top of your lungs, and chase it away.  Someday soon that lesson will be a valuable one.

For all the other newborn fawns you encounter, remember the words of the New York State Department of Environmental Conservation: “If you care… Leave them there!”