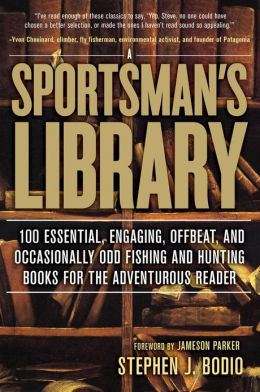 But first, before going any further…  A small disclosure and a serious warning.  I’ve read and enjoyed a couple of Bodio’s other books, and I’ve occasionally visited his blog.  Then a couple months ago I discovered that A Sportsman’s Library and DEERLAND would both be released by Lyons Press on the same day.  So I got in touch, and since then we’ve traded books and traded a few e-mails.  That was fun, and it turned out we enjoyed each others’ books.  This will not, however, influence what I write here.

As Steve writes in the introduction to A Sportsman’s Library, “In 1993, reviewing books for Fly Rod & Reel, I was accused of writing something nice about someone I knew.  I had, and will.  My argument goes like this: First, the world of outdoor writers, even the larger world of letters, is a small one.  Sometimes I think we all know each other. So, I will not give a good review to a bad book by a friend.  I will bend over backwards to be fair to those with whom I have had disagreements. I will not give a bad review to someone I do not like.”  Words to live by.  And write by.  I have, and will.

That’s the small disclosure.  Now here’s the serious warning.  If you hunt or fish, and if you also read, then this could be one of the most expensive books you ever buy.  Although its cover price is only $18.95, the problem is with all those other books you’ll be wanting to buy after you’ve finished this one—the 100 mentioned in the title, but also a couple dozen more “honorable mentions.”  Consider yourself warned.

A Sportsman’s Library: 100 Essential, Engaging, Offbeat, and Occasionally Odd Fishing and Hunting Books for the Adventurous Reader.  Now there’s a subtitle you can sink your teeth into—and one letting us know from the beginning that this will be more than just another “100 best” or “100 most significant” list.  This is going to be a fun list.  Bodio also notes in his introduction that most hatch-matching and how-to books haven’t made the cut.  He does, however, make a few exceptions.

A small number of predictable standards do make the list—Aldo Leopold’s A Sand County Almanac, Norman Maclean’s A River Runs Through It, and Izaak Walton’s The Compleat Angler, to name just three.  But others are more obscure alternatives.  To supplement The Compleat Angler, for example, there’s the Dame Juliana Berners 1486 classic The Book of St. Albans: A Treatise of Fishing With an Angle.  And then there are dozens of obscure oddities that fulfill the subtitle’s promise of being “engaging, offbeat, and occasionally odd.

Chronologically, Bodio’s picks range from Emperor Frederick II’s 1244 The Art of Falconry to Timothy Murphy’s 2011 Hunter’s Log.  Most are from from the 20th Century, and many are from a time when the idea of a literate—or even literary—book about hunting or fishing was not a surprising notion.  It was a golden era when stories about hunting and fishing—long stories, with few or no photos and many thousands of words—earned writers serious money when they sold them to magazines like Audubon, Sports Illustrated, Atlantic, and The New Yorker.

Alas.  Those days are gone.  But the words remain.  And Bodio’s own words of insightful, erudite, and occasionally curmudgeonly commentary make A Sportsman’s Library a fun read and way more more than just a simple list.  He’s read widely, and he’s written on many of these topics himself.  He’s led quite an interesting life, and he’s someone who really has “been there and done that.”  He was definitely the right person to write this book, his “book of books.”

I suppose if I’d read widely enough to make this sort of list, mine would have been slightly different.  I’d have omitted a few titles and swapped in others.  I suspect that’s true for most readers, and part of the fun was discovering a few books I’d have otherwise never stumbled across.  Bodio did, after all, choose the title A Sportsman’s Library rather than The Sportsman’s Library.

To sum up: A Sportsman’s Library was a delight, and is best described by the words in its own subtitle: “Essential, Engaging, Offbeat, and Occasionally Odd.”  I mean that as the highest compliment.

Although it’s now springtime, another long winter is coming soon.  I’ve already checked, and there won’t be much on TV.  So I suggest you buy a copy of A Sportsman’s Library

now.  Read it once for fun.  Then read it again.  This time take notes, make a shopping list, and start planning ahead.