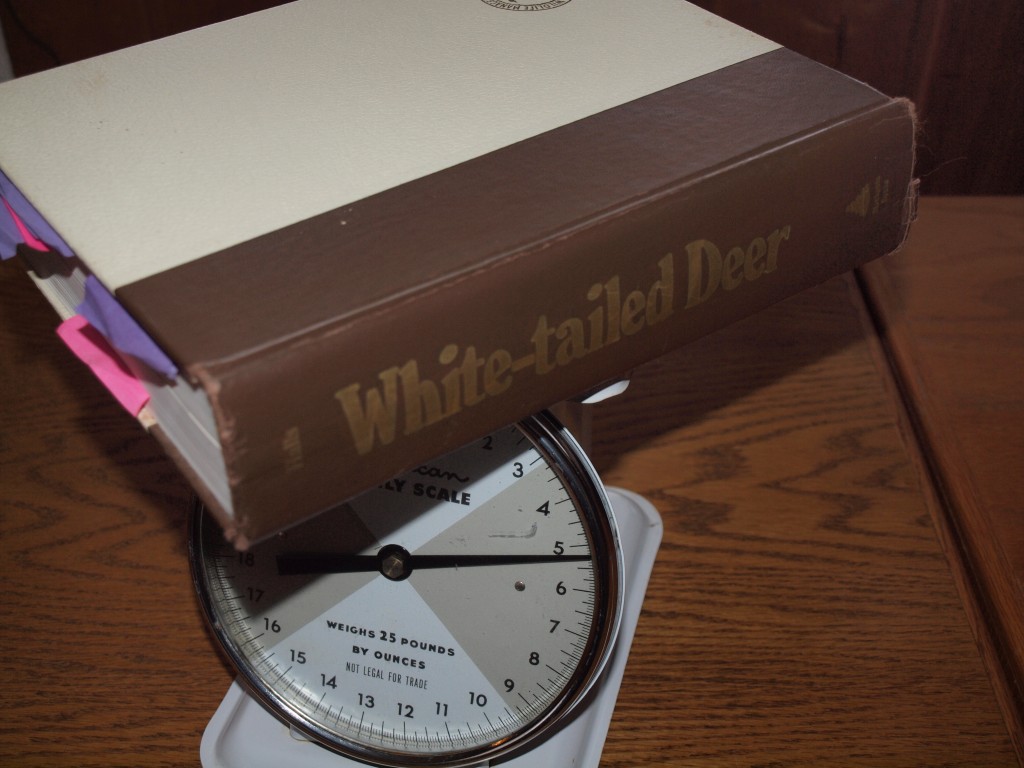 At 870 pages and 5 ¼ pounds, this massive volume definitely qualifies as “heavy reading.”  Published back in 1984, it’s admittedly a bit dated.  Still, even though it was published almost 30 years ago, it contains some great information you won’t find anywhere else.

Edited by Lowell K. Halls, its chapters were written by literally dozens of contributors.  Some, like the 54-page deer history chapter by Richard and Thomas McCabe, would anywhere else qualify as substantial books in their own right.  (The page counts are deceptive; these are big 10.2” x 8.2” pages, each with two columns of fine print—plus lots of photos, drawings, charts, and tables.  In a smaller format with larger photos, that one chapter alone could have easily been a 250-page book.)

Nowhere else can you find a table listing the reported values of white-tailed deer hides marketed in various parts of North America from 1719-1900.  Just for that one table (and it’s only one of many in that particular chapter), the authors cite 15 different primary and secondary sources—all laboriously gathered before the days of Google.  And in case you’re wondering, the first time the price of those buckskins exceeded a buck each was when prices in Michigan briefly spiked around 1814.

Nearby tables summarize the reported value of venison marketed in various parts of North America from 1638-1910, Wisconsin prices from 1844-1895, and records of hide exportation from various ports in the U.S. and Canada from 1698-1885.   In that last table, some totals are listed by count, generally in the tens of thousands per year.  Other hide export totals, however, are listed in tons.  From Sante Fe during the period of 1815-1830: an average of 75 tons per year.  (The footnote, however, mentions that some of those hides were likely from mule deer.)  From Iowa in 1877: An estimated state-wide total of 40 tons.  Considering that these hides would have been fairly light after being thoroughly salted and dried for shipping, they must have been peeled from an incredible number of deer.

As I researched DEERLAND, I read hundreds of journal articles and dozens of other books besides this one.  I also did a fair amount of primary research by interviewing the top experts in their fields.  (And when I say “in their fields,” that wasn’t always a figure of speech.)  With other DEERLAND sources, I headed out into the woods.  With botanists, foresters, and wildlife biologists, I hiked around and asked lots of questions.  With an urban bowhunter, I climbed about 20 feet up an aspen that, once the late afternoon wind came up, felt like it should have been slightly larger in diameter to support the two of us.  To get my roadkill story, I spent an entire shift riding around with a State Trooper.  (But at least, unlike one of our guests that night, I got to sit in the front seat.)

So don’t get me wrong.  I did lots of other research.  But despite its age and its worsening spinal injuries, my ancient copy of White-Tailed Deer: Ecology and Management was an invaluable resource for a couple passages having to do with the history of deer and venison.  It was also just darned entertaining on many long winter evenings.

Although books like this aren’t for everyone, you might finding it entertaining, too.  If it’s for you, by now you know.  Whether you’re a trained professional or just an an obsessive amateur, this is a book you should own.

One thought on “A Review of White-Tailed Deer: Ecology and Management”