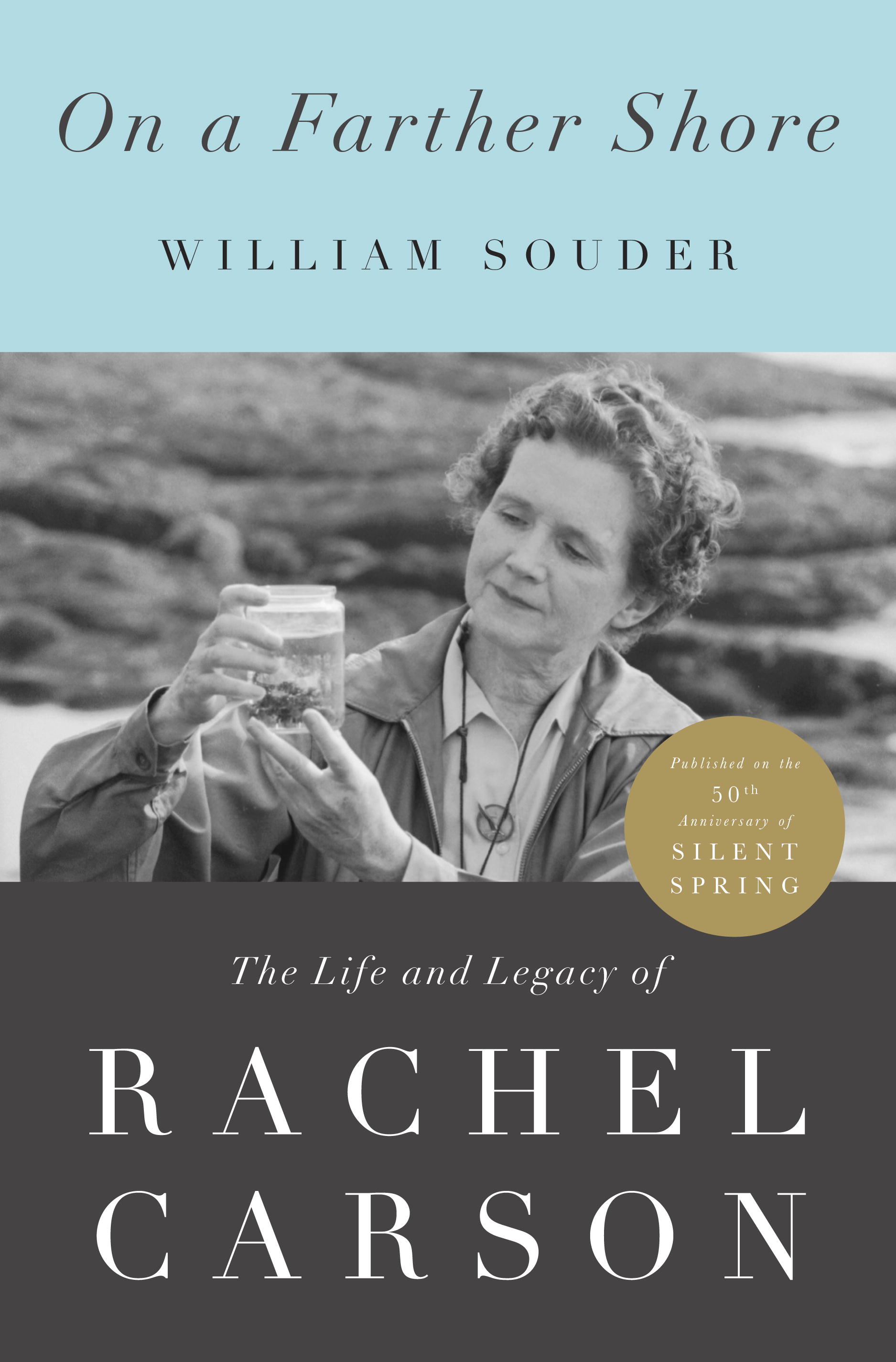 William Souder’s new book On a Farther Shore is a fascinating biography of an key figure in the history of the modern environmental movement—and more broadly, in the history of American science, letters, and intellectual life in general.  And as his book’s title suggests, it’s as much about Carson’s legacy as it is about her life.  In his early chapters, Souder also takes time to set the historical and intellectual context for the story he’s about to tell.  As much as I enjoyed these seeming digressions, there were a couple times when I wondered where they were going.  But only a few pages later, they turned out to be totally relevant.

Carson’s book Silent Spring is credited by many with inspiring the modern environmental movement.  But Souder also makes a compelling case for Carson having accelerated a schism in that movement, one that still exists today.  He even points to the precise moment when he believes that happened.  (It was on August 28, 1962. But you’ll have to read the book for the rest of the story.)

True, Americans had already found themselves drawn to different flavors of environmentalism. (Think Gifford Pinchot’s utilitarian, exploitive brand of conservation versus John Muir’s more ecstatic, preservationist view that saw the natural world as having intrinsic value.)  But that division was about to deepen and become more political.

In Silent Spring, Carson raised important questions about the over-use of synthetic pesticides whose precise mechanisms and risks were at the time still poorly understood.  It’s important, however, to note this important point: “She felt, Souder writes, “that they were useful and advisable if applied sparingly and with care.  This was an important point, as she would later be accused of calling for the total elimination of chemical poisons—as part of a concerted campaign to discredit her, even though she had repeatedly said something different.”

Indeed, the chemical industry’s disinformation campaign against Carson and her book was massive and well-funded.  And because Carson’s science was solid and her facts unassailable, the attacks often turned personal.  The industry openly accused Carson of being a communist, which was still a serious thing back in those waning days of McCarthyism.  The Secretary of Agriculture reportedly wrote to Dwight Eisenhower that because Carson was unmarried despite being physically attractive, she was “probably a Communist.”  The New Yorker published this letter from an angry reader: “Miss Rachel Carson’s reference to the selfishness of insecticide manufacturers probably reflects her communist sympathies…. As for insects, isn’t it just like a woman to be scared to death of a few little bugs! As long as we have the H-bomb everything will be O.K. P.S. She’s probably a peace nut too.”

Although she never set out to be seen as a pioneering feminist, she also found herself facing attempts to portray her as an emotional, irrational woman who was a little on the slow side, and thus incapable of understanding science and chemistry.  Nothing could have been farther from the truth.  In fact, many of her more technical explanations of the relevant chemistry were edited out before the book was published.  Souder notes that Silent Spring still included 55 pages of citations and references.  (His own book includes quite a few, too.)

Souder draws some interesting parallels between the campaign to discredit Carson and later disinformation campaigns from the tobacco, petroleum, and natural gas industries.  He muses on what Carson would think of our current debates over fracking and climate change.  It’s an interesting question to ponder.

And amazingly, the anti-Carson disinformation campaign continues to this day.  Fifty years later, fact-challenged “Silent Spring deniers” are still out there.  One persistent meme has to do with the supposed connection between Silent Spring, the banning of DDT, and malaria in Africa.  It’s often claimed, for example, that “Rachel Carson killed more people than Adolph Hitler,” or that “Rachel Carson is responsible for deaths of 20 million Africans.”

In one of his later chapters, Souder does a good job of thoroughly debunking these claims.  He also argues the point in a recent Slate article.  For now, here’s the short version: First, DDT was only banned in the U.S., and has remained available in most other countries.  Second, Carson explicitly stated her belief that using pesticides to combat insect-borne diseases like malaria was one of its legitimate, “morally necessary” uses.  Third, the real reasons sub-Saharan Africans haven’t had more DDT are these: most of them live in remote, hard-to-reach places; sharp reductions in funding have limited the effectiveness of organizations like the World Health Organization; and saving these people’s lives has continued to be a low priority for the rest of the world.

But after 50 years, people continue making these claims.  If you visit Amazon, you’ll find that Silent Spring

is still selling quite well.  You’ll also, however, see great examples of a not-so-great trend: people who obviously haven’t read the book—or, one suspects, all that many other books—flitting by to give it a one-star rating just because they didn’t like its message.  If you visit the Amazon page for On a Farther Shore: The Life and Legacy of Rachel Carson

, you’ll see that one of these anonymous one-star wonders has already stopped by to do the same for Souder’s book—despite having not read it.  In this, Souder should take great pride.

I recommend actually reading his book.  (And also, of course, Carson’s.)  On a Farther Shore is available online and at bookstores everywhere.

6 thoughts on “William Souder’s On a Farther Shore: The Life and Legacy of Rachel Carson”