Call of the Mild: Learning to Hunt My Own Dinner 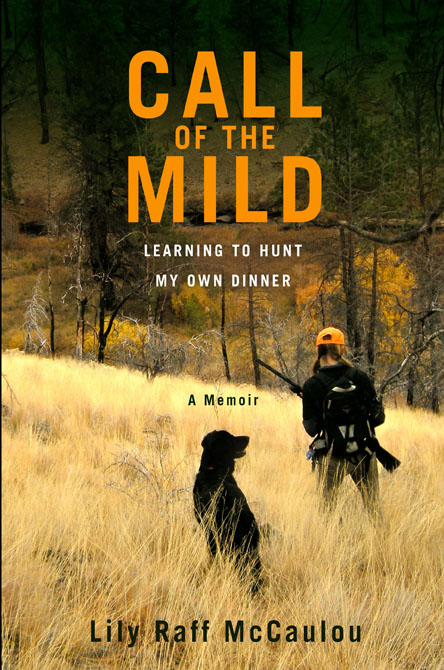 I recently finished Call of the Mild: Learning to Hunt My Own Dinner

, by Lily Raff McCaulou.  Being an adult-onset hunter myself, I’m fascinated by the stories of others who shared this experience.  McCaulou has crossed a cultural chasm, and the story of that crossing reveals much about our cultural landscape.

She begins her very first chapter with these words: “You would be hard-pressed to find an unlikelier hunter than me.  I’m a woman, and married to a man who does not hunt.  I grew up in a city, terrified of guns.  I love animals, and even entered college on track to become a veterinarian.  Yet, at the age of twenty-six, I made the strange decision to pick up a gun and learn to hunt.  It was a complicated choice, but it started with one simple thing that almost all of us—hunters and non-hunters, women and men, city dwellers and country bumpkins—have in common: dinner.  Not the greens and grains on the side of the plate, but the hunk of meat in the middle.”

Unlike Tovar Cerulli, author of The Mindful Carnivore: A Vegetarian’s Hunt for Sustenance

, McCaulou didn’t begin as a vegetarian.  But in other ways her transformation was just as dramatic.  Her journey began with a literal one, from New York City to Bend Oregon.  As she applies for jobs in the West, she begins “Dear _______, Don’t let the address at the top of this letter fool you.  I’m not just a city slicker looking for a Western adventure.”

“But the truth is,” she writes, “that’s exactly who I am and what I’m looking for.”  She finds it.  She also finds a new career, new friends, and new love.  And along the way, inspired by Michael Pollan, a vegetarian friend, and her many new friends and neighbors who hunt, she finds a new way to obtain that hunk of meat in the middle of her plate.

She learns, however, that it’s not easy getting started.  “And then it dawns on me,” she writes.  “Hunting is a twenty-first century rarity—something you can’t learn online or in a book.  There’s no Hunting for Dummies.  There are no intro classes at the local community college.  Most hunters would have you believe that theirs is the sport of the everyman.  But I’m finding it to be oddly exclusive.  Hunting isn’t so much a hobby as an inheritance, passed from one generation to the next.  You have to learn from someone, and that someone is usually your dad.  But where does that leave me—an adult whose parents are openly disgusted by the idea of killing an animal in the wild?”

For starters, it leaves her the one adult in a hunter’s ed class; most of her classmates are twelve-year-old boys, nearly all of whom are more experienced and comfortable with guns than she is.  She seems to handle all this with grace and charm, and she eventually graduates with a certificate and a congratulatory letter addressed “to the parents of the Hunter Safety graduate.”

After a few shooting lessons, her next hurdle is The Shopping Trip.  Her stories about condescending male gun shop employees of questionable competence are humorous only in retrospect, and those guys are going to be pretty embarrassed if they read Call of the Mild and recognize themselves.  But they didn’t sound like big readers, so it may not be a worry.

Over the pages that follow, McCaulou also gives readers far more positive glimpses into hunting culture and the role hunting plays in wildlife conservation.  Non-hunting readers are likely to finish her book with a greater acceptance and tolerance of hunting, and hunters will enjoy most of those passages, too.  Hunters will also find fascinating this glimpse into how they and their culture are viewed by outsiders and newcomers.

(From what I understand, however, the most controversial part of the book has been McCaulou’s brief and relatively mild criticism of the NRA.  If you’re an NRA member who’s easily offended, just skip those two paragraphs.  Enjoy the rest of the book.  McCaulou’s mostly on your side.)

Call of the Mild: Learning to Hunt my Own Dinner is subtitled A Memoir, and it’s a deeply personal one.  It’s a hunting story, but it’s also a love story, and a story about other pivotal life events that McCaulou experiences during this period.  Not all of them are happy ones.  On balance, however, Call of the Mild is a fun read.  I finished it in one sitting, and it was way more entertaining than whatever might have been on TV that night.  I give it two thumbs up.  You can visit her website and order your copy right here.

Hunting Wolves in Minnesota, Wisconsin, and Michigan: Different From Wyoming, Idaho, or Montana?

Wolf Bait, Bear Bait, and What’s on the Menu