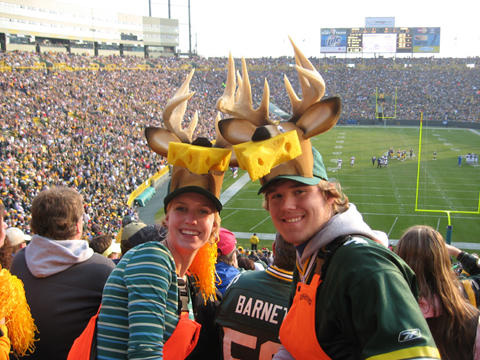 Last week Cabela’s announced that it would soon be opening a new store in Green Bay, Wisconsin.  The Green Bay Gazette quoted Cabela’s CEO Thomas L. Millner as saying “Cabela’s loves Wisconsin.”  He added that his company’s corporate colors are yellow and green, just like those of a certain football team.  The story also noted that the store’s 21-acre site on Lombardi Avenue is owned by the Green Bay Packers.  When I read all this, I immediately realized that it was first and foremost a deer story.

Now, I know what you’re thinking.  True, I am working on this book about deer.  Yesterday, as is typical, I spent nearly the entire day thinking and scheming about deer.  When I took a break to walk to the mailbox, I returned with the latest issue of Deer & Deer Hunting, one of my favorite magazines.  It included several interesting articles, one of which I’d written.  In the evening I relaxed by reading most of the others.  But I’m not obsessed with deer, and there really is a cosmic connection between Cabela’s, deer gear, and the secret history of the Green Bay Packers.  Let me explain.

Cabela’s, just like Bass Pro Shops, Gander Mountain, and all of their smaller competitors, is a company built on deer.  Last year 40.2 percent of its $2.6 billion in revenues came from Hunting Equipment, 27.2 percent from Clothing and Footwear, 13.2 percent from Fishing and Marine, 9.8 percent from Camping, and 9.1 percent from Gifts and Furnishings.

What these figures don’t tell you is that hunters, especially deer hunters, also account for most of Cabela’s clothing and footwear sales. Similarly, its Camping category is heavy on deer gear like hunting knives, flashlights and headlamps, and even home meat processing equipment.  (True, most of us wouldn’t enjoy grinding hamburger in a backpacking tent, and we might also have some concerns about bear hygiene.  But at stores like Cabela’s, Camping tends to be a catch-all “miscellaneous” category.)

Today more American hunters pursue deer than any other quarry.  So do more American dollars.  If deer hunting—not all hunting, just deer hunting—were a single corporation, its $15 billion or so in annual revenues would earn it a spot in the top 200 of the Fortune 500. Conservative comparisons place it in the same general pack as companies like CBS, Pepsi, and General Mills.

This all leads us to one inescapable conclusion.  The American outdoor industry wasn’t built on fish, pheasants, or squirrels.  It was built on deer.  It could just as accurately, in fact, be described as the American deer industry—or, as I like to call it, the American Deer-Industrial Complex.

Now about those Green Bay Packers…  Today very few fans remember that the Packers began in 1919 as the amateur team—not so different from today’s tavern league baseball teams—of the Indian Packing Company, which specialized in canned meats.  Among its slogans were “A meat market on your pantry shelf” and “From the Wisconsin country to you.”

Even fewer fans remember that the very first meat packed and shipped out of Green Bay “from the Wisconsin country to you” was venison.  Through most of the 19th century, market hunters delivered deer carcasses and hides to the city’s docks literally by the ton.  All this cargo was carefully weighed or counted, and a few shipping records still exist.  In 1806, for the purpose of making candles, Green Bay shipped out 120 kegs of deer tallow weighing 4,536 kg.  During the years 1835 and 1836, Green Bay and Milwaukee shipped a combined total of 20,966 hides.  Hide prices during this period fluctuated, but in Michigan exceeded a buck a deer as early as 1814.  And yes, that’s the origin of our slang term for a dollar.

You see?  It’s all connected, and it’s all about the deer.

P. S. — If you’d like your very own hat like the ones in the picture, visit www.bigguyhats.com.

2 thoughts on “Cabela’s, Deer Gear, and the Secret History of the Green Bay Packers”