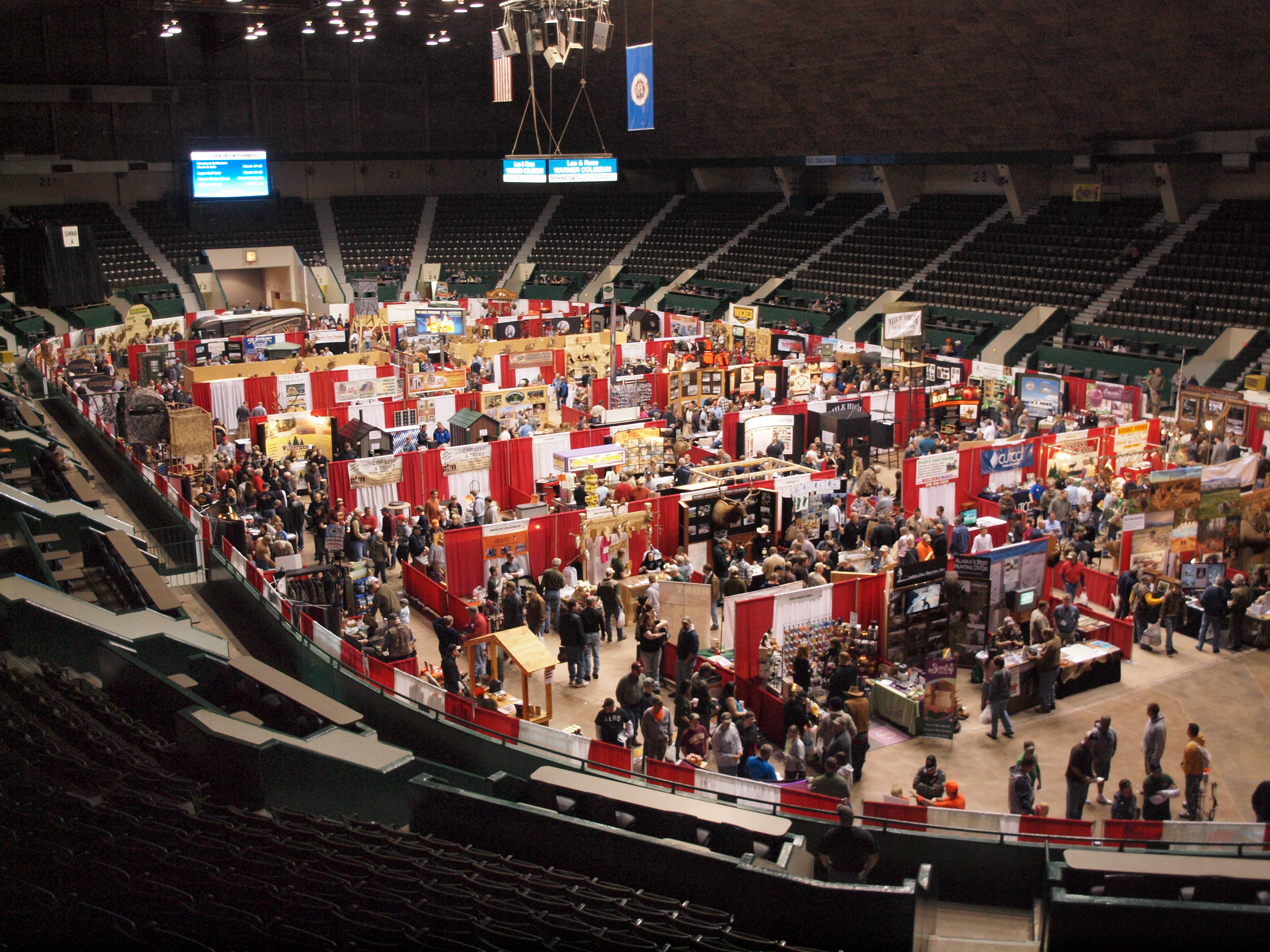 Why, yes they are are.  And that’s a good thing.  In fact, it’s the law.  American deer hunters are socialists, and it’s OK.  If anyone tells you otherwise, be very, very suspicious.  Seriously.  Let me explain…

(But first, let me hasten to add that American hunters are also capitalists, and that the American Deer-Industrial Complex is alive and well.  Just to verify this, yesterday I drove down to Saint Paul, Minnesota for an annual deer expo.  The shot above shows around half of the expo’s booths.  I spotted a couple interesting new bits of deer gear.  I also saw people getting out their checkbooks and credit cards, and I overheard many deals being done.)

So what’s up with that deer-hunting socialism for which we should be so thankful?  At the first Thanksgiving in 1621, the Pilgrims were lucky that their new neighbors were more skilled at both hunting and farming.  Better yet, their neighbors were happy to share with those less fortunate.  Edward Winslow writes that the Indians “went out and killed five Deere which they brought to the Plantacion, and bestowed on our Governour, and upon the Captain, and others.” Turkey wasn’t actually on the menu that day, and the main course was venison.

But that was just sharing and being neighborly.  The real socialist hunting tradition started 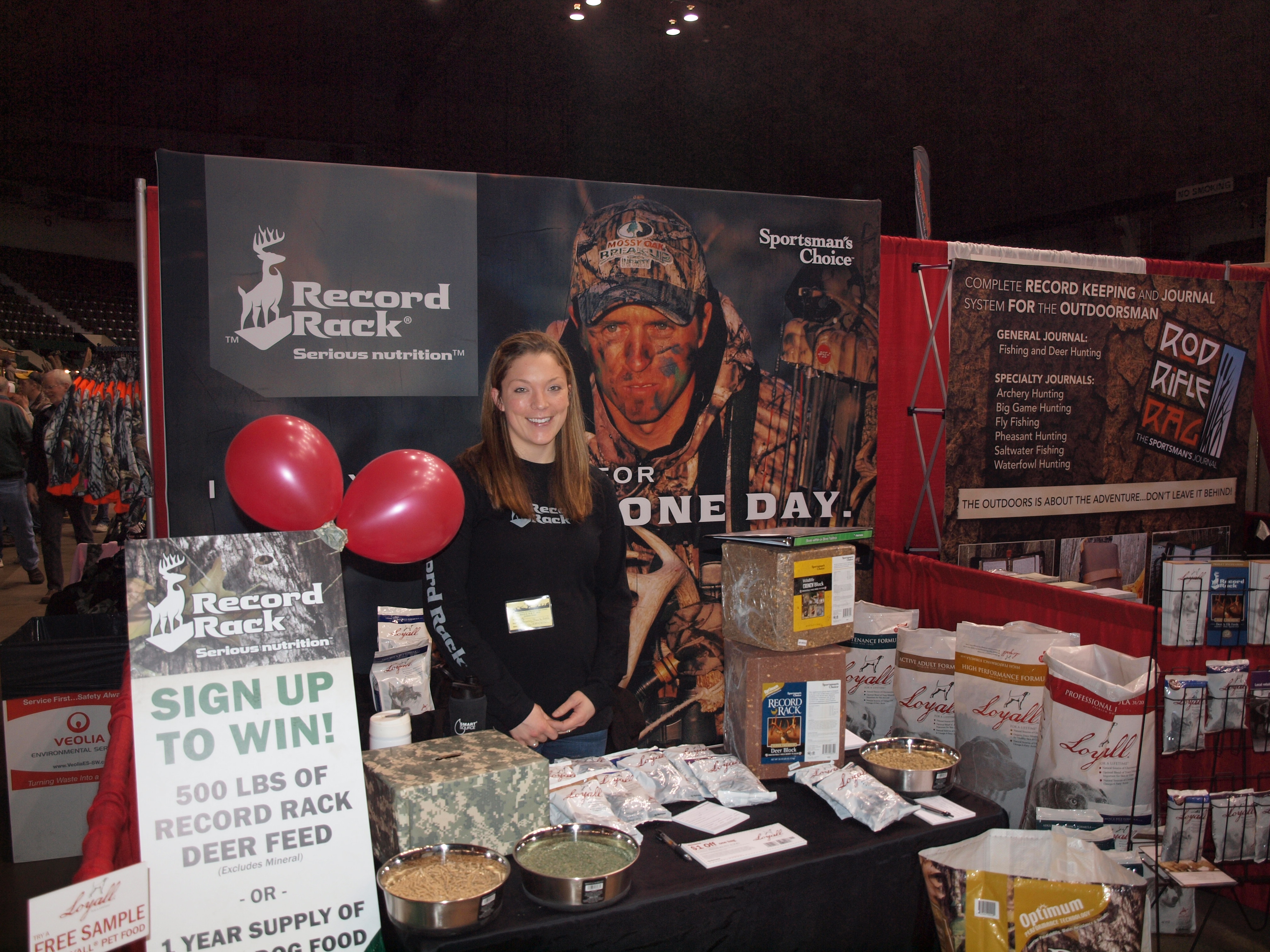 later, when all those newcomers ventured into the woods and started learning some woodsmanship themselves.  Back in the Old World, hunting was a privilege reserved for royalty and nobility.  Here, anyone could hunt.  The colonists could pursue, shoot, and eat whatever they want, and what they most wanted was deer.  It was an unheard-of freedom, one of the things that made America different right from the beginning.

It still does make America different from most other countries.  This land is your land, and these deer are your deer.  Really.  They are.  The wild deer of North America belong to you.  They also belong to me, and to everyone else.

This radical Marxist idea is a key tenet of something called the North American Model of Wildlife Conservation.  (Wildlife biologists and deer managers usually just call it “The Model,” and it’s so revered that it’s always capitalized.)  According to their professional organization, The Wildlife Society (TWS), The Model is based on seven key principles, the first and foremost of which is that wildlife—not just deer or other hunted species, but all wildlife—belongs to the people, and the states or provinces hold it in trust for the benefit of all.  When deer walk onto your land, they don’t become your property.  They still belong to everyone.  In the law this principle dates back to an 1841 Supreme court decision, which in turn referenced the Magna Carta.

Here in the U.S. and Canada, you don’t have to be wealthy to hunt.  And if you’re 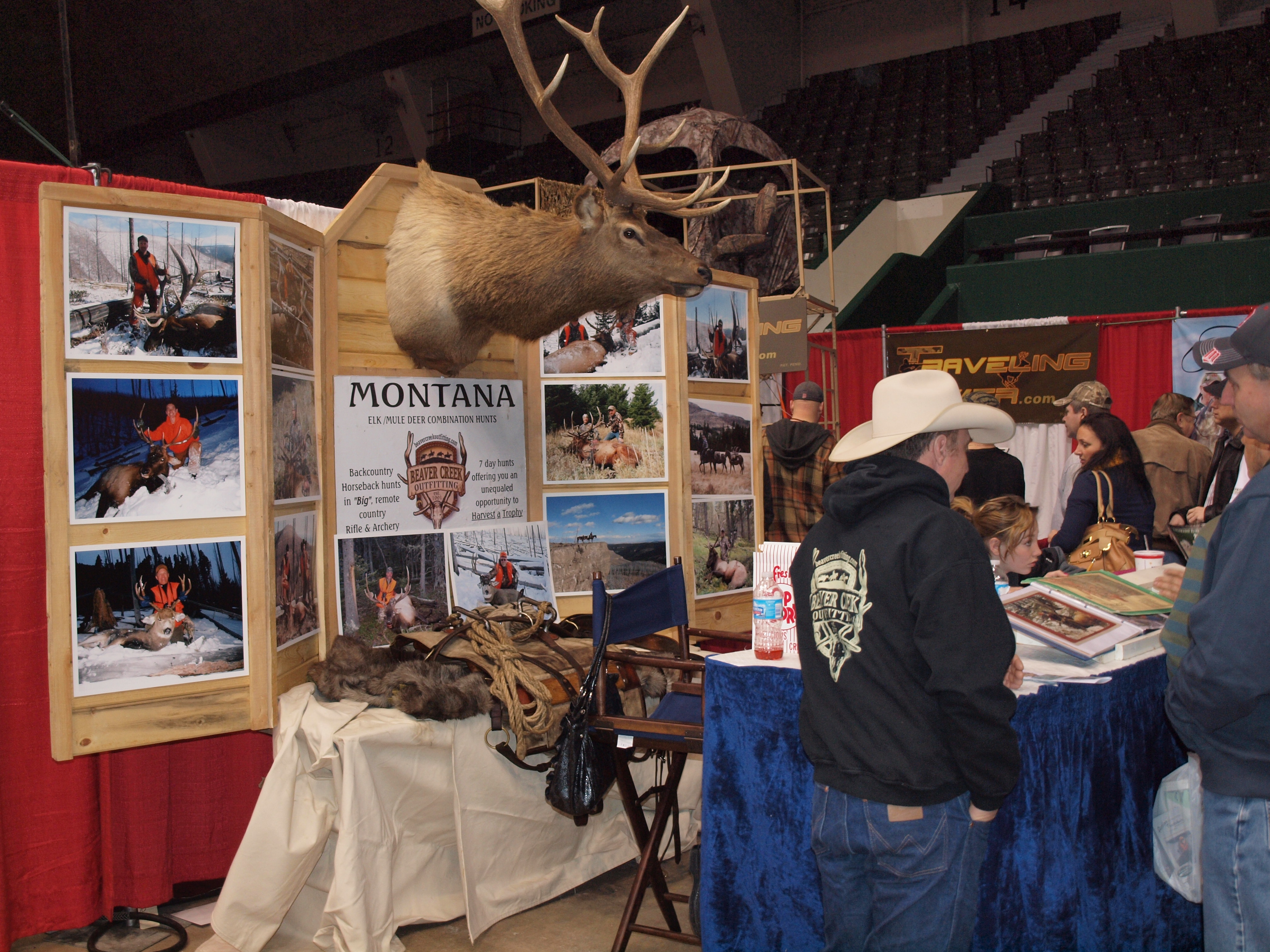 lucky enough to live in a state with plenty of public land, say one of those left-leaning states like Montana or Wyoming, then you’ll have lots of great places to hunt—even if you don’t own a single acre of your own.  And all those deer, elk, pheasants, and eagles belong to you and me.  (I’m not saying we should start hunting eagles.  That’s just a reminder that this isn’t only about hunting.)  Is this a great country or what?

OK, so maybe I’ve exaggerated a little.  Maybe this isn’t socialism, and maybe instead we should call it a democratic, egalitarian tradition.  And most American hunters, however they may vote, have been pretty happy with The Model for the last three or four centuries.  But last week, interestingly, Field and Stream blogger Hal Herring wrote about the outgoing Conservation Director of Alaska’s Fish and Game Department.  Before resigning after being charged with 12 game violations, he’d quietly been working on a secret plan to privatize Alaska’s wildlife.  He actually does believe The Model is an evil socialist plot, and he’s described it as such.  (But as these photos will attest, The Model seems to co-exist very peaceably with capitalism as we know it.)

Still, those views are shared by certain politicians, and also by one or two deer celebrities 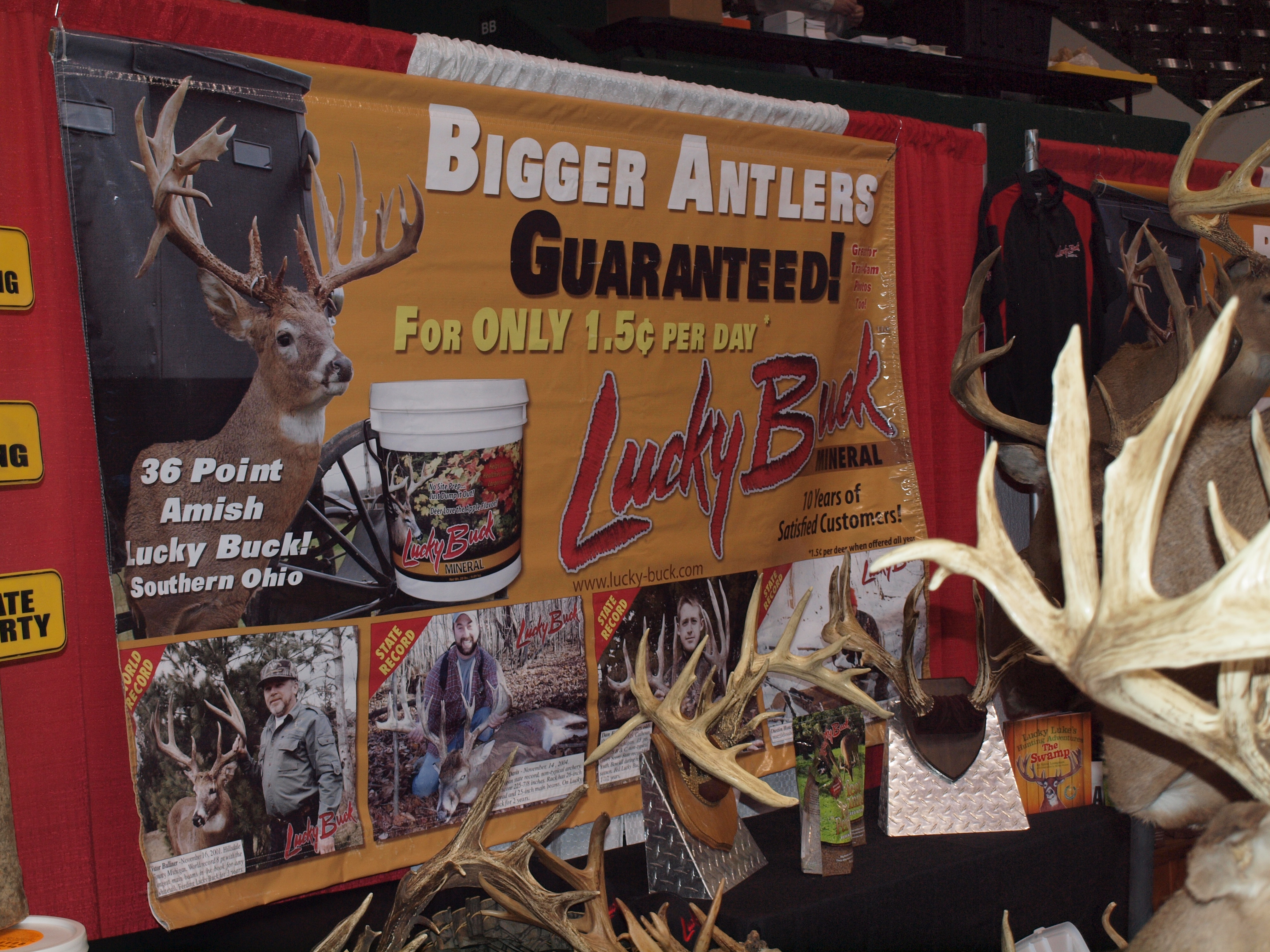 who are active in the captive cervid industry.  Apparently, right now there’s a feud brewing in Deerland about The Model and how it relates to certain aspects of deer farming.  That’s a story for another time.  For now, here’s a link to the Quality Deer Management Association’s position.  Apart from a few exceptions like me, most QDMA members own a large amount of land and have the time, money, and inclination to manage it for the benefit of deer.  I’m pretty sure most of them are not Marxists.  If they do own a hammer and sickle, the sickle is only used for trimming around their deer stands.

The QDMA is not alone.  Below is a partial list, in alphabetical order, of outdoor organizations that are 100% behind the North American Model of Wildlife Conservation.  (A big thanks to Eric Nuse of Orion – The Hunter’s Institute for providing this list.  And yes, his organization is on it.)  I don’t agree with every organization’s position on every issue, and for that matter they don’t all agree with each other on most issues.  Except this one.

So remember…  This land is your land, and these deer are your deer. 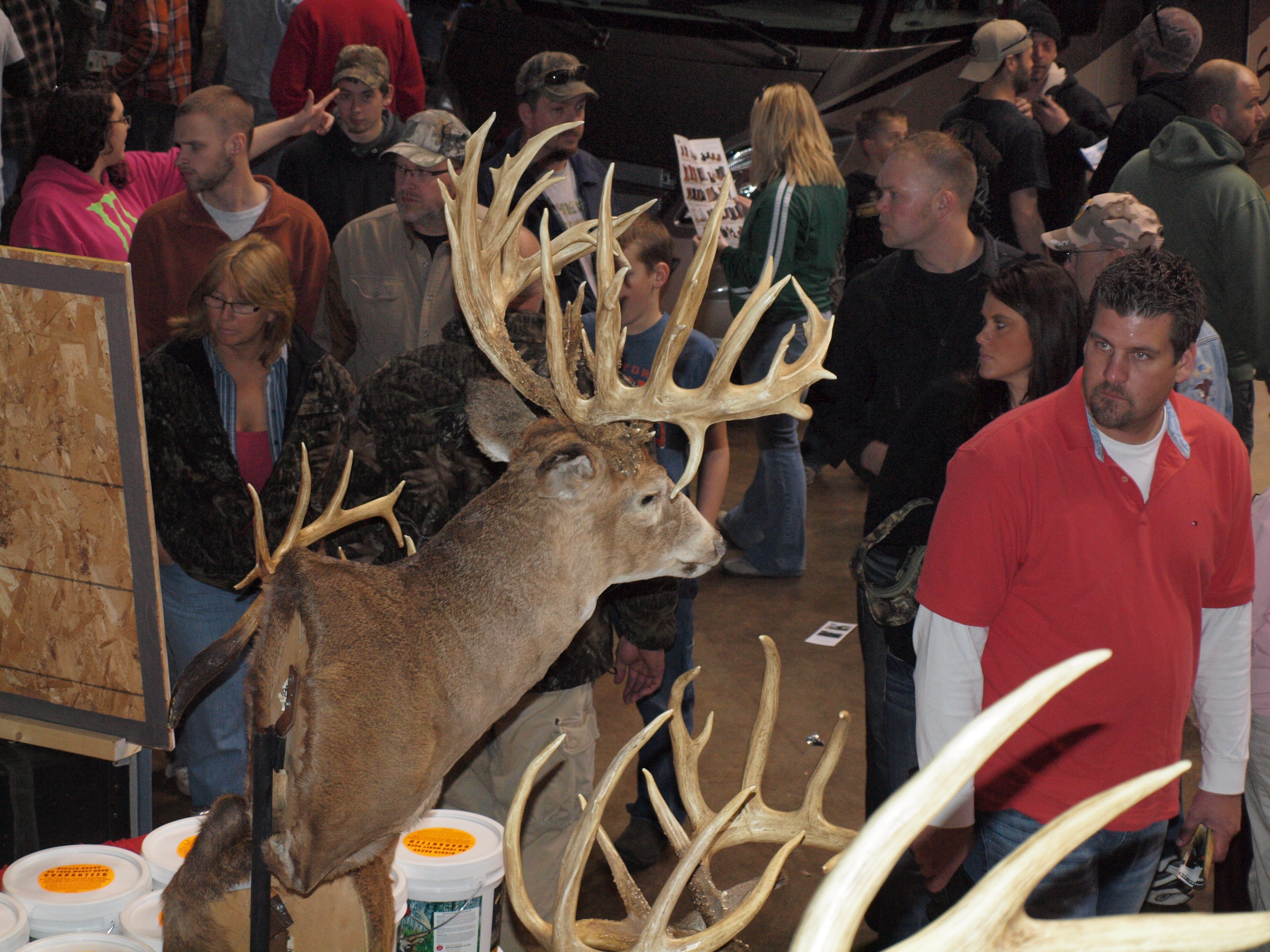