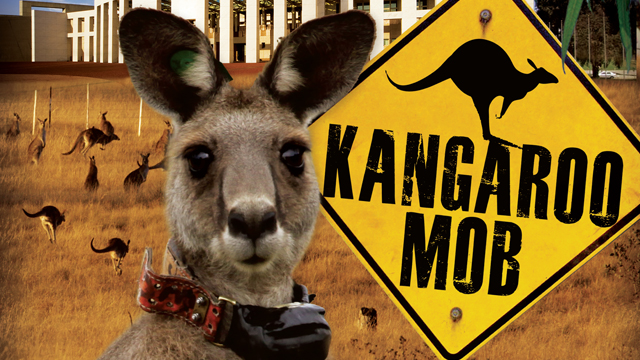 Last night I watched a fascinating episode of the PBS show Nature.  It was titled “Kangaroo Mob.”  Apparently that’s what groups of them are actually called—not herds, mobs.  The episode told of how frustrated Australians are trying to cope with exploding kangaroo populations in and around Canberra.  Only a decade ago, there were a few hundred.  Today there are tens of thousands.

Out beyond the city limits, drought and skyrocketing kangaroo populations have caused ecological devastation and left the landscape denuded of vegetation.  As hungry, thirsty kangaroos invade the suburbs, the citizens of Canberra are coping with hundreds of car crashes, increasing damage to landscaping and natural vegetation, and incredible hordes of kangaroos that are just generally making a nuisance of themselves.  In several recent incidents, they’ve attacked people and pets with no apparent provocation.  As sometimes happens with deer here in America, a few confused ‘roos have even crashed through windows and into suburban homes.

Local officials have reluctantly decided to stage a cull.  Although most Canberrans support it as a necessary step, a few have donned kangaroo masks and staged angry protests.  Two wildlife biologists we follow during the program are tracking radio-collared kangaroos in the hopes of learning more about their habits and movement patterns.  Meanwhile, we also meet a couple who are working hard to rescue kangaroos that have been injured or orphaned.

Elsewhere, not far from Canberra, overabundant kangaroos have sometimes outmatched the land’s carrying capacity and starved in large numbers.  In one notable 2009 example, the Royal Society for Prevention of Cruelty to Animals (RSPCA) chastised the Defence Department for not holding a cull on a nearby military base.  After mowing the base’s threatened grassland preserves and leaving the ground pretty much bare, an estimated 5,000 kangaroos starved that summer.

For me, the Kangaroo Mob story was especially fascinating because of its obvious parallels with overabundant urban and suburban deer here in North America.  In Deerland, I plan to include an entire chapter on the topic.  Its working title: “The Invasion of the Suburban Cervids.”  In some ways, deer in Connecticut aren’t all that different from kangaroos in Canberra.

Australia actually has deer problems of its own; it has six different types of deer, all of which are non-native invasives.  In addition to kangaroos and deer, Australian hunters can also pursue feral cattle, goats, and camels.  Which is probably a good thing, since most of these animals have at various times and places reached outrageous population levels that caused serious problems for both humans and the natural environment.

The camels are quite large; I suppose if a hunter were to shoot one in rugged terrain that could only be reached on foot, it would be a lot of work to hump it out.  Sorry.  Couldn’t help myself.  Actually, though, feral camels are no joke.  Australia currently has over a million, and that number could double by the end of the decade.  In large parts of the country, they’re now causing serious environmental damage.

Australians have learned to take their invasive species seriously.  The rabbit is probably the one animal that has caused the most damage there.  Today the ownership of live rabbits is regulated in most of the country, and Queensland recently raised its fine for the possession of a single pet rabbit from $3,750 to $30,000.

Meanwhile, back here in North America…  Deer are not, strictly speaking, an invasive species.  They were here first.  But they sure can be invasive.  As I research Deerland, I’ve been talking with experts and learning a lot about the lethal and nonlethal control strategies being used when deer invade our cities and suburbs.  I’ve learned a lot about what works and what doesn’t.  The solutions aren’t simple, and implementing them isn’t always easy.  But sometimes doing nothing is not a option, and sometimes letting nature take its course is no kindness.

Or, as one ecologist recently told me, “Just because you’re not shooting them doesn’t mean you’re not killing them.”  Suffering.  Compassion.  Kangaroos.  Deer.  Birds.  Trees.  Sedges.  Ferns.  Humans.  It’s complicated.

9 thoughts on “Urban Kangaroos, Urban Deer, and Finding a Balance”