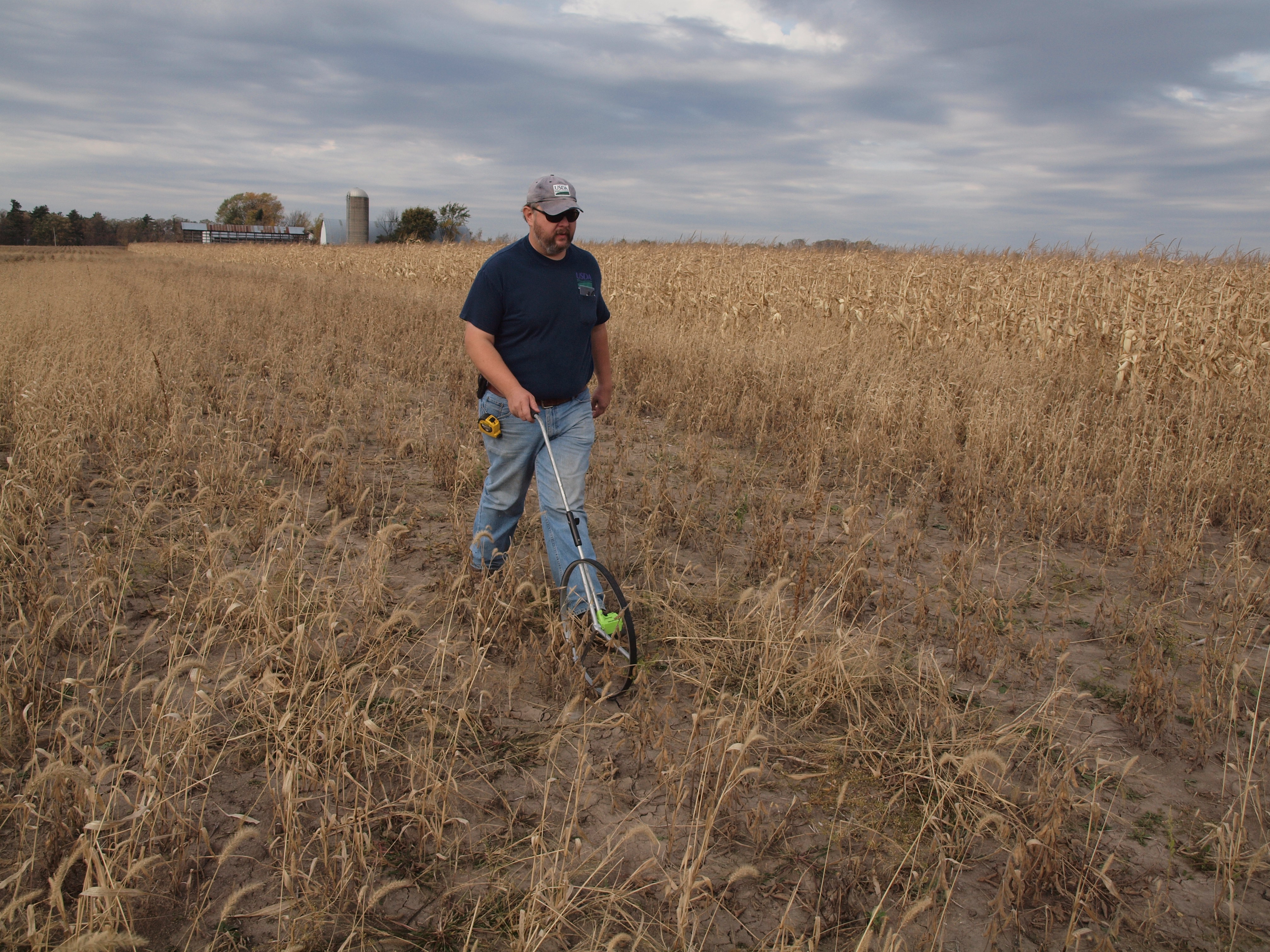 Last week I met government agents and heavily armed strangers on a street corner, in a gas station parking lot, and in a cemetery.  But don’t worry.  It’s not nearly as bad as it sounds.  It’s all in the name of research, and it’s all about the deer.  I can explain everything.  First, the government agents.

Lately I’ve been out in the field—literally—with Wildlife Specialists from a USDA-APHIS organization called Wildlife Services.  I’ll tell you more about these organizations next time, but for now let’s just say these people are from the federal government and they really are here to help.  Among other things, they work closely with state and county-level agencies to help mitigate the agricultural impacts of deer.  Here in northern Wisconsin, bears are also a big part of the story.  (Last week we surprised one in the middle of a cornfield.  Despite having just eaten its fill, it managed to move pretty quickly.  Made some awful grunting and wheezing sounds, though.)

The administrative details are complicated, and farmers can choose to enroll in different variations of the program.  But in general, it works something like this: Farmers concerned about deer or bear damage sign up with the program.  Just before harvest, an appraiser assesses the damage.  After lots of calculations, the damage gets assigned a dollar amount.  If it’s over the $500 deductible, farmers get a check in that amount, up to an annual cap of $10,000.  (For the portion that’s over $5,500, the farmer gets 80%.)  The program is paid for in part by surcharges on hunting licenses.

Since appraisals are a key part of the whole program, I was curious to learn how they work.  My first trip was with someone I already knew, my friend and hunting mentor Eric Fromm.  (He’s also the co-author of my first book, Gut It. Cut It. Cook It.)  This is his day job.  The second time I went out with a guy named Chad Alberg.  He’s a Wildlife Specialist who covers an area farther to the south.  Both are great guys, and I learned a lot from both of them.

Although I’m in no way ready to take over for either of them when they need a day off, I

did learn to tell whether corn has been damaged by deer, bears, raccoons, or birds.  That’s important, because only damage from deer and bears is reimbursable.  Deer damage can look different, depending on whether it occurred as the corn was still growing, a little later as the cob was forming, or after the corn was mature and kernels fully formed.  Eric told me the freshest damage would be when cobs were stripped and deer saliva was still dripping off them, so I should probably wash my hands when we got back to the truck.

Raccoon damage is characterized by stalks that are broken and fallen in every direction.  Cobs are stripped, but still on the stalks.  Raccoons climb up the stalks until they break off somewhere near ground level, then eat the corn that’s now within reach, and repeat.  It must be great fun.  Birds, as you might guess, land on a cob, pick away at the husk, and then pick away at the kernels they’ve exposed.  That’s easy to spot.

Bear damage is different.  Bears waddle out into the cornfield, sit upright like a giant furry 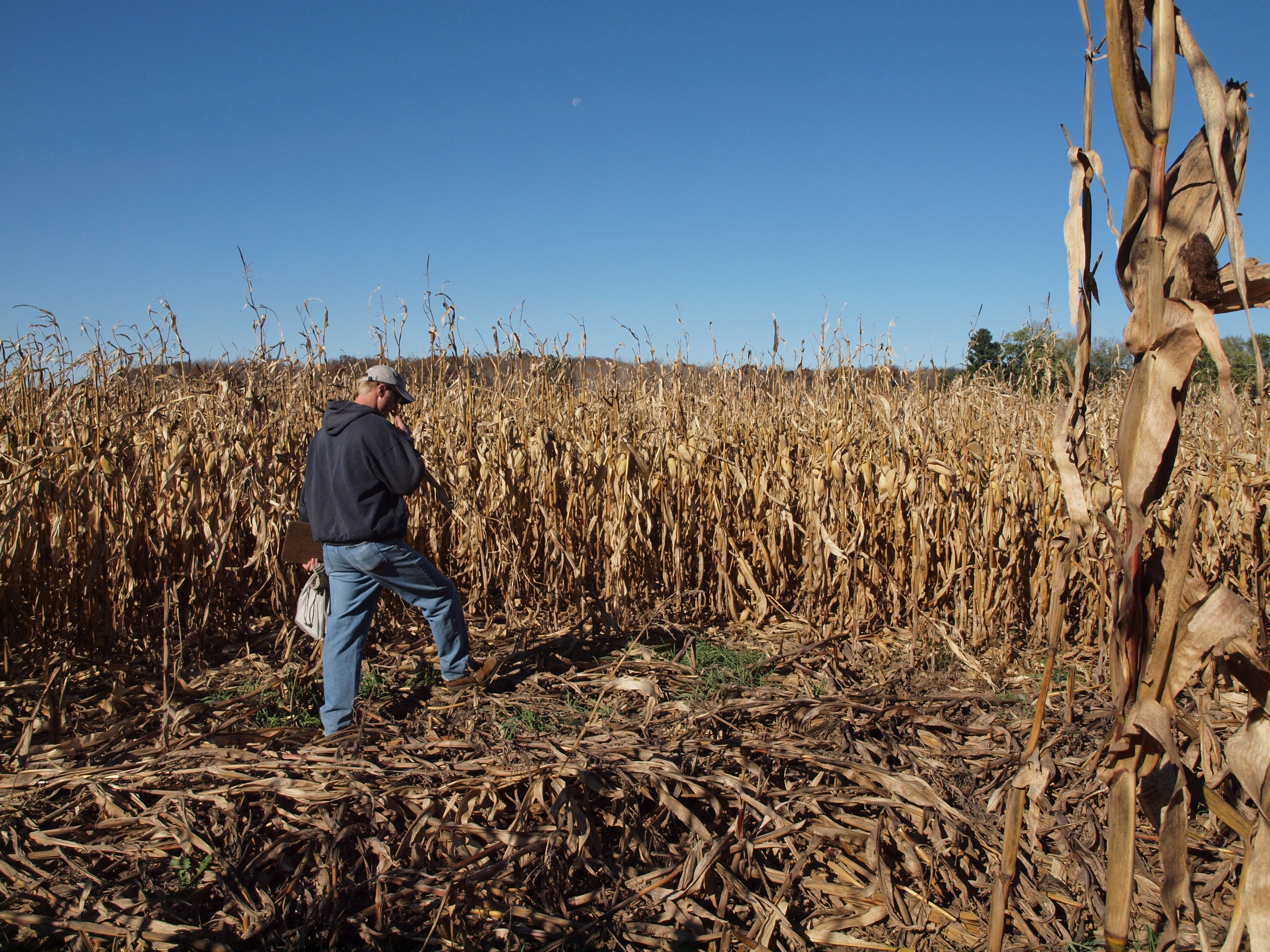 sumo wrestler, and begin raking in big armfuls of corn.  Then they pick cobs off and chew on them one at a time.  They waste very little, at least from their perspective.  Then they shift their bear butts a bit to the left or right, and do it again.  And again.  This leaves characteristic patterns of stalks all laying down in the same direction, but with a bit of a swirly pattern to it.  Here and there, it almost looks like a big cornstalk mattress.  (You can see an example to the right.)

These fields have all been flown ahead of time so we’ll have aerial photos.  That’s the only way to spot most bear damage.  (In a couple cases, it also told us where we’d find especially severe deer damage.)  There could be a clearing the size of a football field out there, and you’d never be able to see it from the edge of the field.  A farmer would not be happy to discover this while combining.  Although we did see some bear-damaged spots from the edge, we only found others because we knew from the aerials exactly where to look.

Deer damage, on the other hand, is typically worse along the edge of the field—especially if it’s an edge next to the woods.  Sometimes the first few rows are a total loss.  Deer especially like corners.  They prefer soybeans to corn, but seem to enjoy both.

For both corn and beans, the appraisal process involves lots of measuring, weighing, and moisture testing with a little electronic gadget.  Then there’s lots of calculating.  To vastly oversimplify, you start by knowing how big the whole field is.  Next you measure the areas that are damaged, sample the yield in the damaged and undamaged areas, and then do a little calculating.  Actually, a lot of calculating.

In the end, the estimates are impressively accurate.  When farmers harvest these fields, their overall yields are usually very close to what the appraisers have predicted.  Although the estimated percentages lost to deer or bear are based on random sampling and certain statistical assumptions, they’re probably pretty accurate, too.

Next time…  APHIS and Wildlife Services: They’re from the government, and they really ARE here to help! 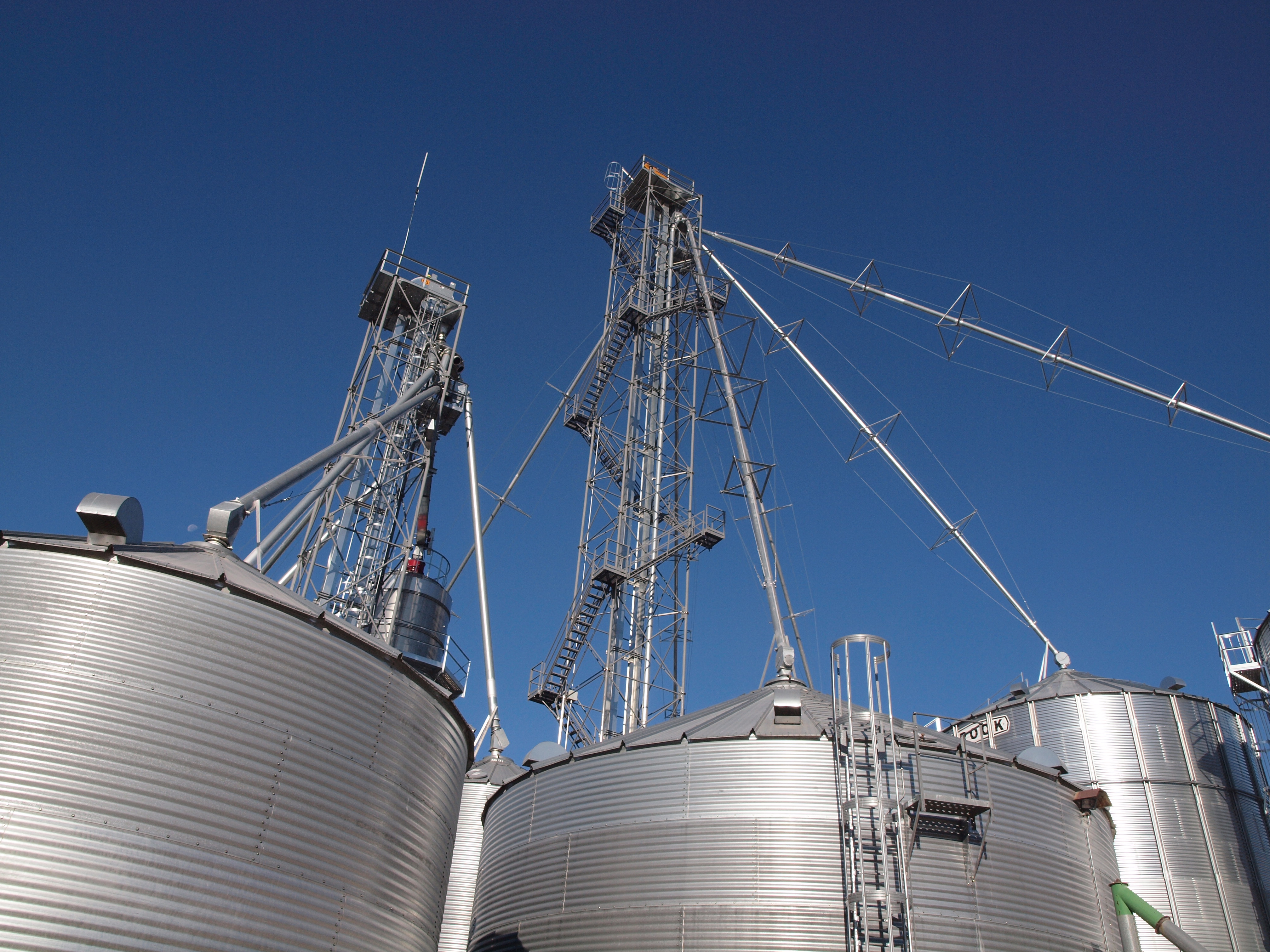