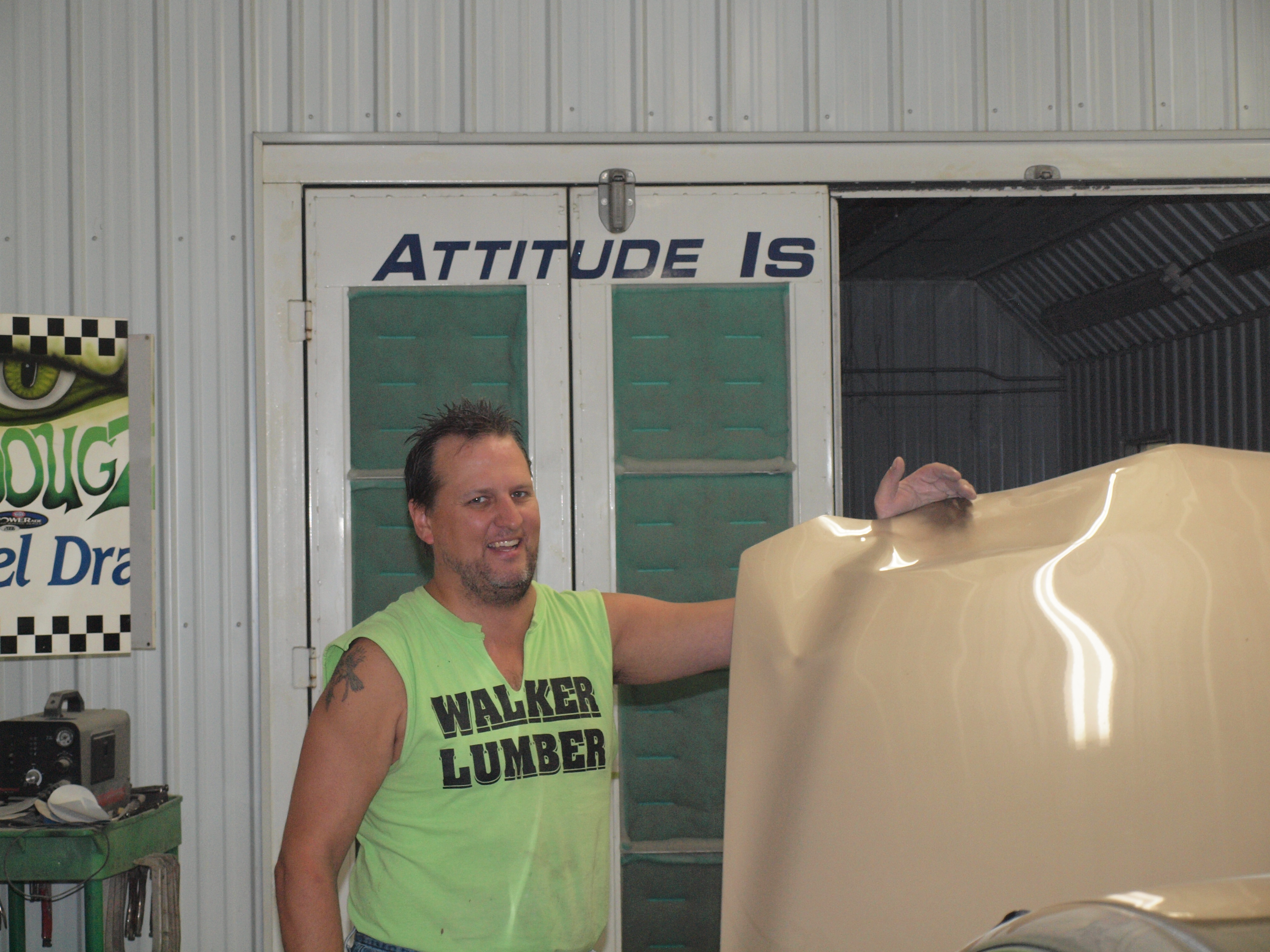 Attitude is everything, and having the right attitude
can save your life when you hit a deer.

The other day I had a great visit with Awesome George Hertzner of Awesome Auto Body in Minong, Wisconsin.  Over 60% of his business comes from deer-car crashes.  Most of the rest comes from people who drink and drive.  He told me he owes his job security to just two things: deer and beer.

For this DEERLAND public service announcement, George wants you to remember just one thing:  “If you’re driving down the road and a deer steps out in front of you, don’t swerve.  Hit the damn deer.”

This isn’t because George wants your business.  He has plenty.  It’s just that he’d rather not see you become earlier-than-expected business for your local funeral director.

When drivers hit a deer, they’re rarely injured.  (The drivers, that is.)  But when they swerve, chances are good they’ll go in the ditch and roll over or hit a tree.  Or, they may lose control and head toward a car in the other lane.  “If you have time to stop,” says George, “then stop. But don’t swerve and risk your neck over a deer—or worse yet, over a 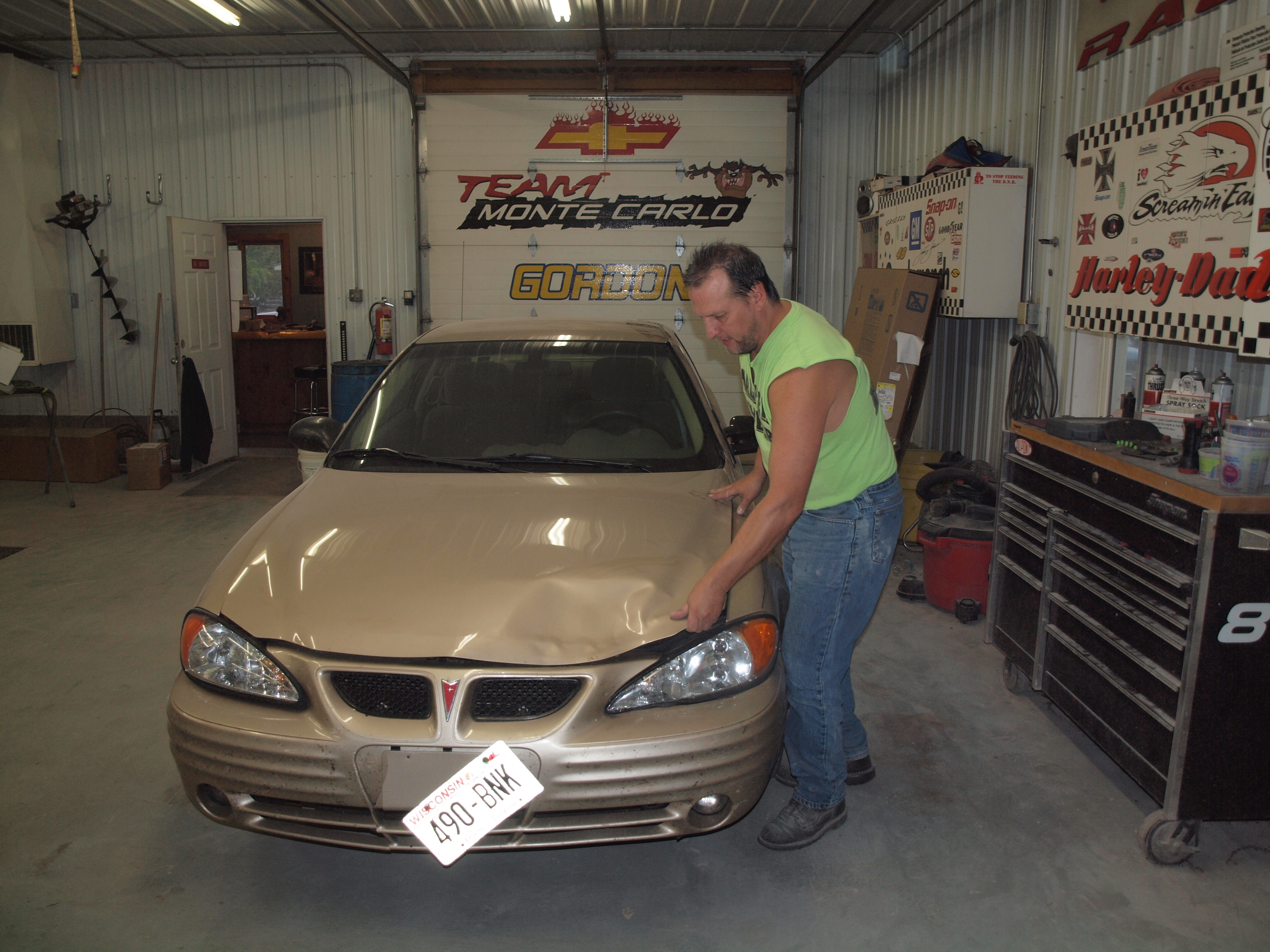 dog or a squirrel.  Believe me, I’ve seen it happen.”

George also wants you to stay vigilant, especially at dawn and dusk.  And if you see one deer crossing the road, slow down.  One or two more of its friends could be getting ready to step out onto the pavement.  The next couple months are especially risky.  Deer will be moving a lot, and their little deer minds will be on other things.  The rut is approaching.

(If you’re unfamiliar with that term, I’ll use one often seen this time of year in newspaper stories meant for a family readership.  Deer will soon be entering “mating season.”)

Early spring is bad, too.  Tasty grass is greening up along the roadside.  Later in the spring, does are moving with their fawns.  In summer, biting insects harass deer and push them out of the woods.  Come to think of it, about the only slow deer-crash months for George are December and February.  Oddly, there’s a spike every January.

And if you think you only need to worry about hitting deer here in the north woods, think again.  George owes over 60% of his business to deer because traffic is usually pretty light around here.  That means fewer crashes are caused by other factors.

Percentages are one thing.  But logically, your actual risk of being involved in a deer-car crash is highest in precisely those places where deer populations are highest.  If your daily commute takes you through the suburbs of states like Connecticut, Pennsylvania, New York, or New Jersey, then you’re at greater risk than someone like me who lives way out here in the woods.

As Awesome George puts it, “Don’t swerve.  Hit the damn deer.  You’re worth more than a deer or a car.  And your car can be fixed.  Your neck can’t.  Your car?  That’s what insurance is for.”

If you know in your heart that this advice will be hard to follow, then it’s time to adjust your attitude.  Once again, Awesome George has some awesome advice: “Don’t worship your car, and don’t get too attached.  It’s just a vehicle, a tool to get you from point A to point B.  It’s insured.  Cars are like socks.  Be ready to change them once in a while.”