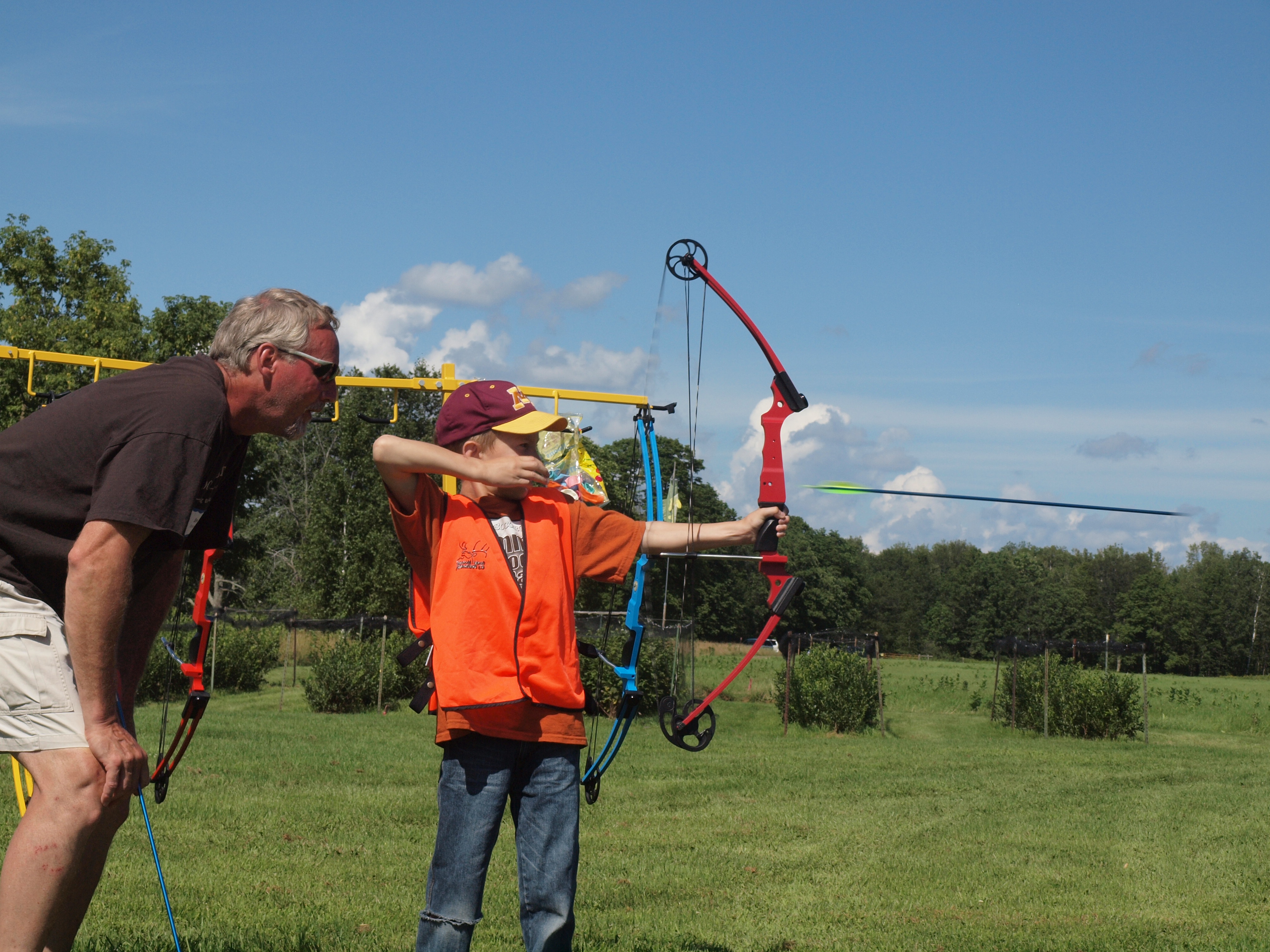 As I mentioned in my last post, I recently attended the Minnesota DNR’s Deer Day program for new hunters.  It was a fun event, and I enjoyed meeting so many enthusiastic adult-onset hunters and hearing their stories.  I also learned a few things myself.

The event was originally part of the Becoming an Outdoorswoman (BOW) program, but was later broadened to include men, young people, and whole families.  It’s held at the farm of Betty and Dan Wilkens, who have graciously hosted the event every August for the past several years.  It takes some acreage to host an event like this, and also some good backstops for the various rifle, shotgun, and archery ranges.

Apart from brief opening and closing sessions, most of the program consisted of breakout sessions held at various stations participants rotated among during the day.  In addition to all the shooting, there were sessions on treestand safety and blood tracking for bowhunters.

The treestand safety session may not have been as fun as some of the others.  It was, however, an important one.  Today far more hunters are injured by falls from treestands than by gunshot wounds.  First, we learned about the pros and cons of various types of stands and harness systems.  Then we learned it may not be a good plan to use a safety rope that leaves you dangling upside down ten feet below your treestand and ten feet above the ground—especially if the rope is attached to a belt or a cheap harness that’s cutting off your circulation fast.  Can’t reach your cell phone or your jacknife?  If there’s no one within earshot, you could be out of luck.  It will be another three to five minutes before you lose consciousness.

As they were wrapping up, the two Conservation Officers giving this presentation demonstrated a couple of really nice ground blinds.  (If you’re unfamiliar with the concept, ground blinds are small camo-colored, special-purpose tents with windows you can shoot through.  When sitting in a ground blind, you’re hidden well enough so you don’t have to sit as still as you would out in the open.)  By then this seemed like a very appealing alternative.

Next up for my group was the blood trailing lesson.  Earlier that morning, our instructors had prepared simulated blood trails that were quite realistic.  Apparently this had involved a pail of pig blood, a large brush, and various spatters and droplets artistically applied to the surrounding vegetation.  To my untrained eye, it seemed like a pretty convincing imitation of what you’d see after a lung, liver, or gut shot.  This helped persuade everyone to spend the afternoon on more target practice. 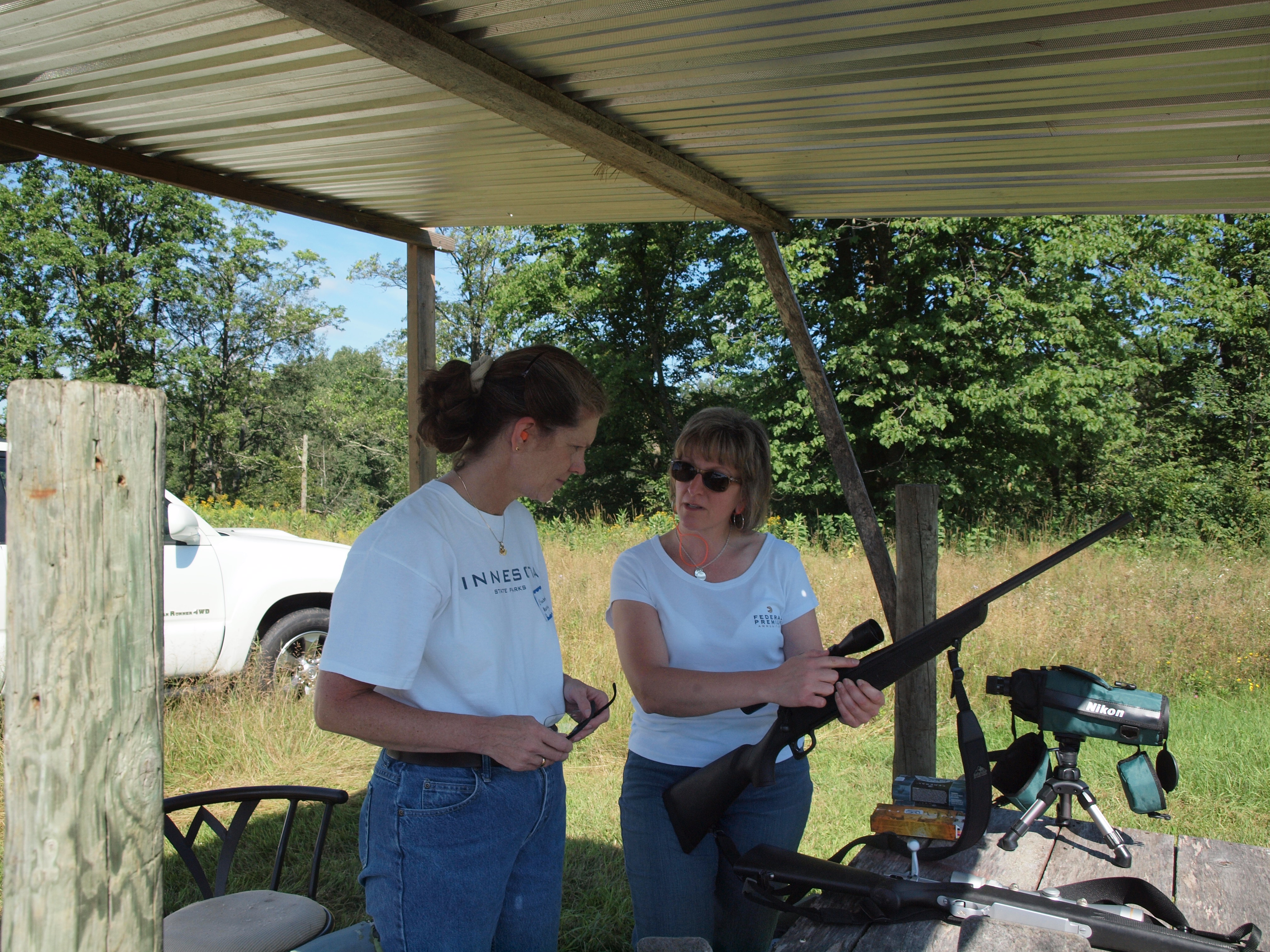 But first it was time to break for lunch, which did indeed include venison.  BBQ sandwiches made with ground venison.  Delicious.

Then it was time for more shooting.  I saw some impressive sunburns getting underway, but everyone seemed to be having a good time and learning a lot.

During the course of the day I talked with several adult-onset hunters and heard their stories.  I got the sense that events like this are a good recruiting tool and a good way to entice newcomers—even people from nonhunting families who have no previous exposure to guns, archery, or hunting.

8 thoughts on “A Deerland Dispatch from Deer Day”