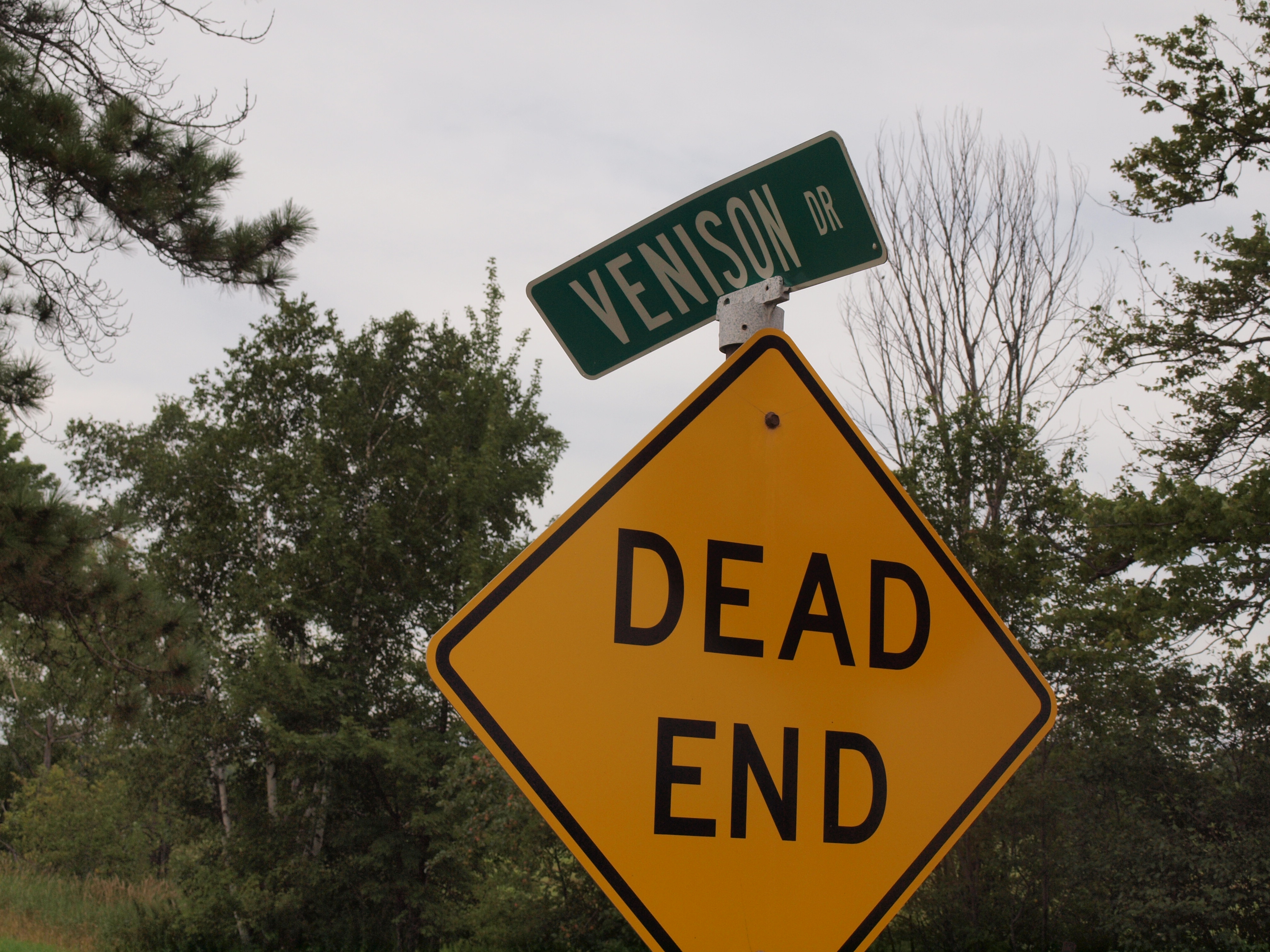 If you are a deer, these two signs are actually quite redundant.

I couldn’t help myself.  I had to pull over and get a photo when I saw these signs.  I’ve seen plenty of Whitetail Lanes, Buck Alleys, and Deer Trails.  But this was my first Venison Drive.

It’s almost time for another oil change.  The past few weeks I’ve been putting on the miles.  But it’s OK.  Along the way I’ve been meeting interesting people and hearing their stories.  Not the same old “me and my buddy went huntin’ and got us a big one” stories.  Not even “I’ve gazed deep into the soulful eyes of deer at my backyard feeder” stories.  New stories.  Big ones.  The kind that are making this job fun.

True, I’ll need to include plenty of facts and statistics in DEERLAND, and I’ll be sure to slip in some solid science along the way.  But the stories I’m beginning to track down are what will make this book fun to write—and eventually, I hope, fun to read.

Speaking of putting on the miles…  Watch for deer out there.  If you ride a motorcycle (or, for that matter, a bicycle), be especially careful.  And wear a helmet.

Saturday I met for a second time with a really nice guy, one of the rare motorcyclists who has collided with a deer and lived to tell about it—despite the fact that he wasn’t wearing a helmet at the time.  The lingering effects of his TBI, however, can occasionally make it difficult for him to tell about it in an organized, coherent way.  That said, he’s made incredible progress with the help of some great doctors, a couple of top-notch neurosurgeons, and a team of skilled physical, occupational, and speech therapists.

He has quite a story to tell.  He’s made it his mission to share it whenever he can.  There’s a moral to the story, one that goes way beyond just remembering to wear a helmet.  It’s a lesson that could save your life—especially if you’re a motorcyclist.  But even if you spend most of your time rolling around Deerland on four wheels rather than two, stay alert.  The deer are out there.

(As a public service, I’m going to spill the beans right now and give you the shortest possible version of the “safer driving in Deerland” story, even if it’s a message that may not be helpful for motorcyclists.  Four words, from a campaign that I believe began with the Iowa DNR and DOT: Don’t veer for deer.  Better to hit the deer than a roadside oak tree or an oncoming car in the other lane.)

The past month or so I’ve also interviewed the manager of a seed company that produces seed for food plots, the world’s leading expert on lethal management of overabundant deer in the suburbs, the president of an organization that coordinates a city bowhunt to keep deer numbers in check, the author of a bestselling book about gardening who for some reason hates deer with a passion, a forester whose job is extra challenging when overabundant deer snack on seedlings that would have become future forests, DNR and USDA officials in charge of deer damage mitigation programs in WI and PA, and the outspoken retired WI deer manager who may have coined the terms “hornography,” “horn porn,” and “master baiter.”

Meanwhile, I’ve attended a couple interesting events.  The first was an orientation night for this year’s urban bowhunt in Duluth, MN.  The hunt is coordinated by the Arrowhead Bowhunters Alliance, whose redundant-sounding name comes from the pointy shape of northeastern Minnesota.  In tourist brochures and local weather reports, that area is called “The Arrowhead.”

I also attended the Minnesota DNR’s Deer Day program for new hunters.  (At our house right now, every day is Deer Day.)  It was a fun event, and I enjoyed meeting so many enthusiastic adult-onset hunters.  I shamelessly took advantage of the opportunity to plug my first book by donating a couple copies of Gut It. Cut It. Cook It. as door prizes for this and another upcoming DNR event.  I have a feeling they’re going to get used and get bloody very soon.

In between, I’ve even taken time off for a couple early-season ag-tag hunts.  Just doing my part to help protect American agriculture.  And did I mention venison is delicious?

Next, I’m on my way back out into the woods to look for more stories.  (And if time permits, perhaps more deer.)  Stay tuned…

4 thoughts on “Adventures in DEERLAND: Watching for Signs, Listening for Stories”