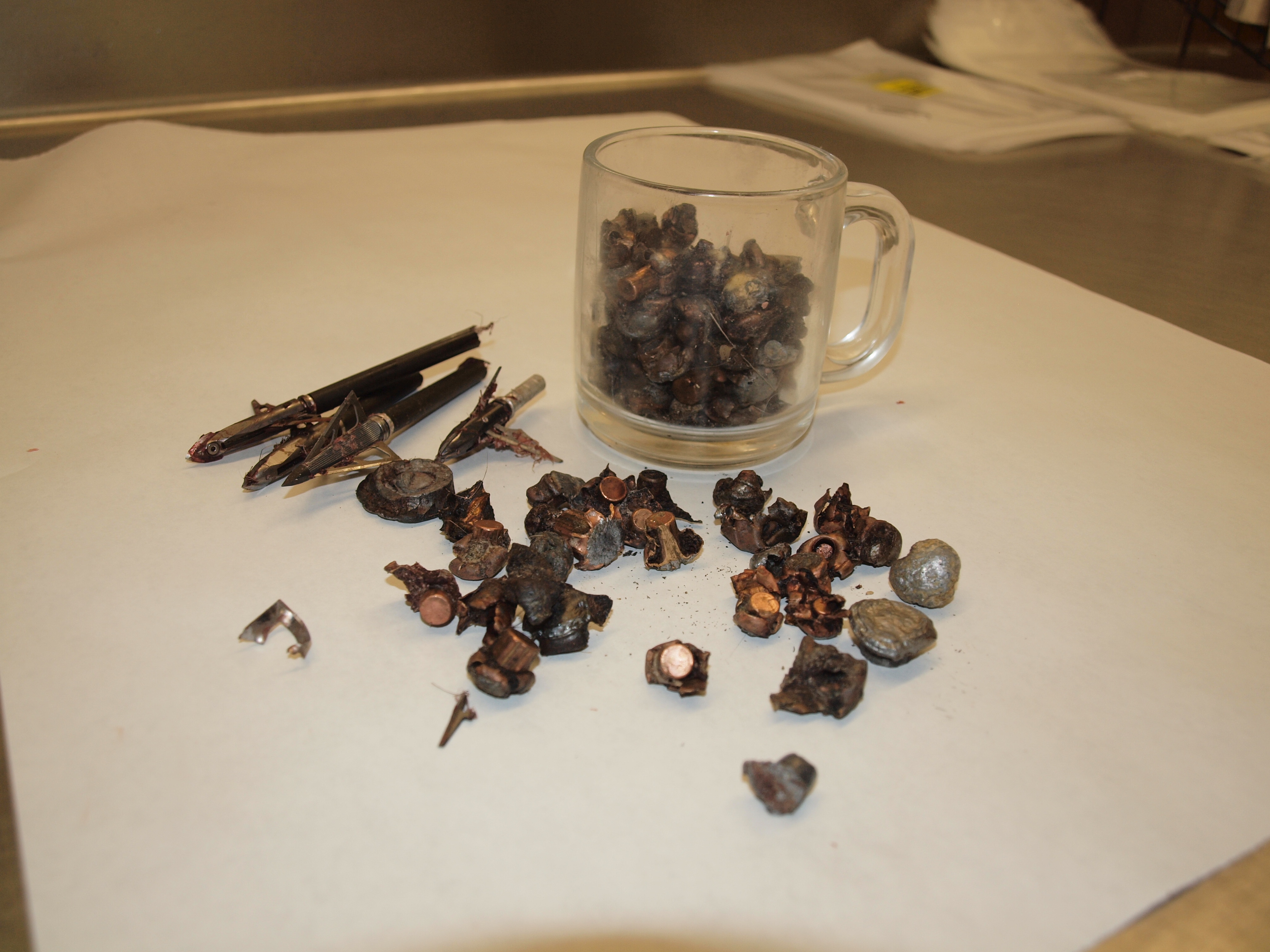 To begin learning more about the venison angle of America’s DEERLAND story, last fall I visited with the folks over at Hursh Meat Processing in Poplar, Wisconsin.  If you hunt in northern Wisconsin but don’t process your own deer, I highly recommend them.  They do over 1,000 deer a year, and they really know their stuff.  Their butchers work on one deer at a time.  All the venison you get back is going to be from your own deer.  The place is spotless, they do meticulous work, and they also make some pretty tasty sausages.

This photo is less tasty, but instructive nonetheless.  If you’re not a hunter, and if you find the image and this topic in general to be totally disgusting, please come back later for future posts that have absolutely nothing to do with hunting.  If you’re a hunter and you still find this totally disgusting, please stick around anyway.  You owe it to yourself, your family, and your deer to read this post carefully.

Every now and then, the butchers at Hursh save souvenirs they’ve discovered when skinning and butchering.  Some of the smallest pieces are only found when making ground venison.  The shop’s massive grinder has a feature that’s missing from my smaller one at home—and probably yours, too.  It’s a specially designed trap that uses centrifugal force to capture small metal fragments.

Elsewhere on the internet, you can find more detailed information about lead in venison, and also about how to choose your ammunition carefully so as to avoid the problem.  For starters, there’s the Cornicelli study from Minnesota (not to be confused with the Cornatzer study from North Dakota), the lengthy conversation that took place last winter over at A Mindful Carnivore, and regular updates on the subject at The Hog Blog.  There’s also lots of information out there about choosing bullets and cartridges that can help you kill deer more humanely.  On occasion, these two topics are related in interesting ways.

But sometimes a simple picture really is worth a thousand words.  Although you can’t see them very well in this photo, there are dozens of tiny lead fragments in the bottom of the glass mug.  I believe the general scientific consensus is that they are not good to eat.  Of even greater concern, however, are the invisible, dust-size particles that can be spread over a wide area, often some distance from the main wound channel.  (For more on that, check out the Cornicelli study.)

Toward the lower right, you can see a couple jackets that are totally separated from their missing cores.  (That’s where all those tiny bits of lead came from.)  They’re most likely from thin-jacketed “ballistic tip” bullets designed to expand more easily on impact.  Other bullets in similar calibers, however, are relatively intact—despite showing evidence of having hit bone.  Some are premium bullets, but others are ordinary jacketed soft nose bullets.  Most of the slower, heavier shotgun slugs, handgun bullets, and saboted muzzleloader projectiles are nearly 100% intact.

I didn’t see any lead-free bullets in this sample.  They may be less popular among local hunters, but there’s also another possible explanation for their absence.  From what I understand, they expand nicely but still tend to penetrate more deeply, usually exiting on the far side of the deer.  They’re more rarely recovered.

Despite all the conspiracy theories floating around out there, I’m not bringing this up because I want to take away your guns and ammo.  In fact, I want you to go buy more ammo right now.  Buy lots more.  When you’re shopping, you may or may not want to buy cartridges loaded with premium, better-performing bullets—some of which happen to be lead-free.  It’s up to you.

The main thing is…  Buy lots of ammo.  Buy an extra box or two for practice, and then buy two or three bricks of .22 rimfire.  While you’re at it, buy a couple more tins of air rifle pellets.  There.  Now go get in some good, careful target practice.

Because most of the bullets in this photo, as varied as they might be, all had one thing in common.  Nearly all of them were recovered from at least the same general area of the deer for which hunters should be aiming.  That’s how these deer happened to end up at Hursh Meat Processing.

Other bullets may have mushroomed perfectly, with 100% weight retention.  But we won’t find them for a while.  They’re still out there in the woods, embedded deep in a pine tree somewhere.

My original plan was to stop with the previous paragraph and end this post on a lighter note.  But let’s face it…  A few of those other bullets also ended up in the wrong part of some poor deer that then died a slow, agonizing death.  No matter how careful your aim, things can go wrong out there.  To make that less likely, now would be a good time to start getting in plenty of slow, methodical target practice.

Next time…  What Your Butcher Knows: Broadheads for Deer.

9 thoughts on “What Your Butcher Knows: Bullets for Deer”