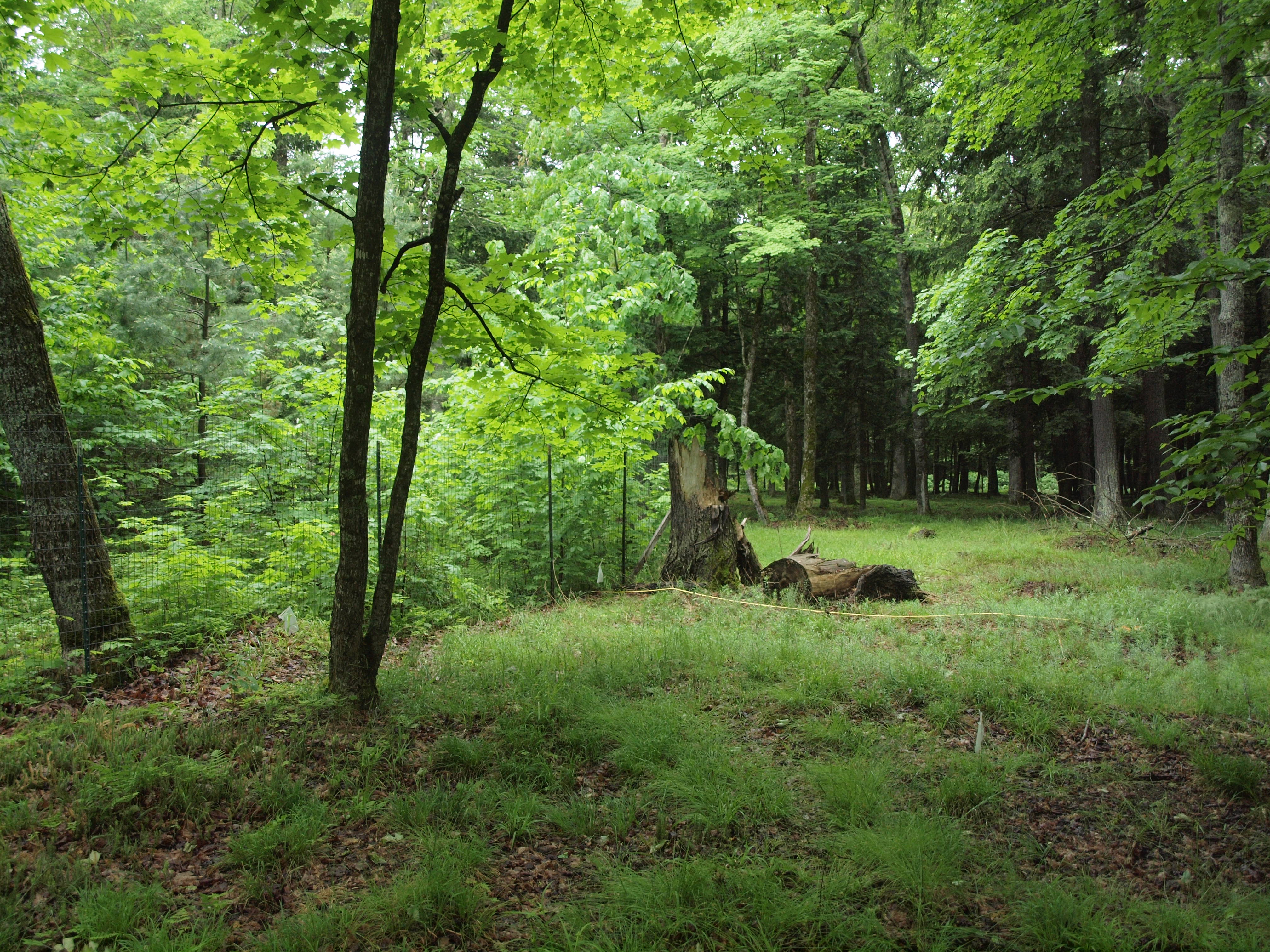 It’s an odd word.  If you’ve never seen it in print, it just looks wrong.  Still, you’ve probably already guessed what it means.  If an enclosure keeps deer in, then an exclosure keeps them out.

Botanists use exclosures to measure, among other things, the effects of overabundant deer on the forest ecosystem.  Although the measuring and analysis can get complicated, the concept is simple: Exclude deer from a small area (or sometimes a large one covering several acres), and then watch to see what happens.  But be patient.  This could take a while.

Eventually, if those overabundant deer are still present on the outside of the exclosure, the areas inside and outside the fence will begin to look very different.  The exclosure in the photo was built over ten years ago, and the area inside still isn’t quite back to normal.  Already, however, it looks very different from what’s on the outside.  That’s what a normal, healthy forest looks like—a forest, that is, with a normal, healthy number of deer.

This particular exclosure is on a 6,000-acre preserve in northeastern Wisconsin called, oddly enough, “Dairymen’s.”  The club was started back in the 20s by a small group of wealthy dairy magnates who wanted a private playground in the north woods.  (Yes, they were the “big cheeses” of the dairy industry.)  They also wanted Dairymen’s to be a wildlife refuge where no hunting was allowed.

Deer had been almost totally eliminated from northern Wisconsin, and they pretty much had been eliminated from the southern part of the state.  So back then a wildlife refuge was a great idea.  By the 40s, however, Dairymen’s had a new problem.  It actually had too many deer.  Looking for answers, the club’s Conservation Committee invited a consultant up from the University of Madison, a professor named Aldo Leopold.  He told them they had four times as many deer as the land could support, and advised them to open Dairymen’s to hunting.

They thanked him for his advice, and then ignored it.  Instead, they decided to solve the problem by feeding the deer.  That way, they figured, the land could support more deer.  As you can imagine, this only made things worse.  Eventually deer densities exceeded 100 per square mile.  The deer ate everything they were fed, but they also ate every bit of vegetation they could reach.  The closer to the lodge, the worse the overbrowsing.

In the 90s, members of Dairymen’s began working with Dr. Tom Rooney, a botanist from Wright University in Ohio.  This sort of thing is his specialty; he’s one of the world’s leading experts on the effects of overabundant deer on the forest ecosystem.

Here, he’s standing next to an eastern hemlock that’s just outside another exclosure.  This 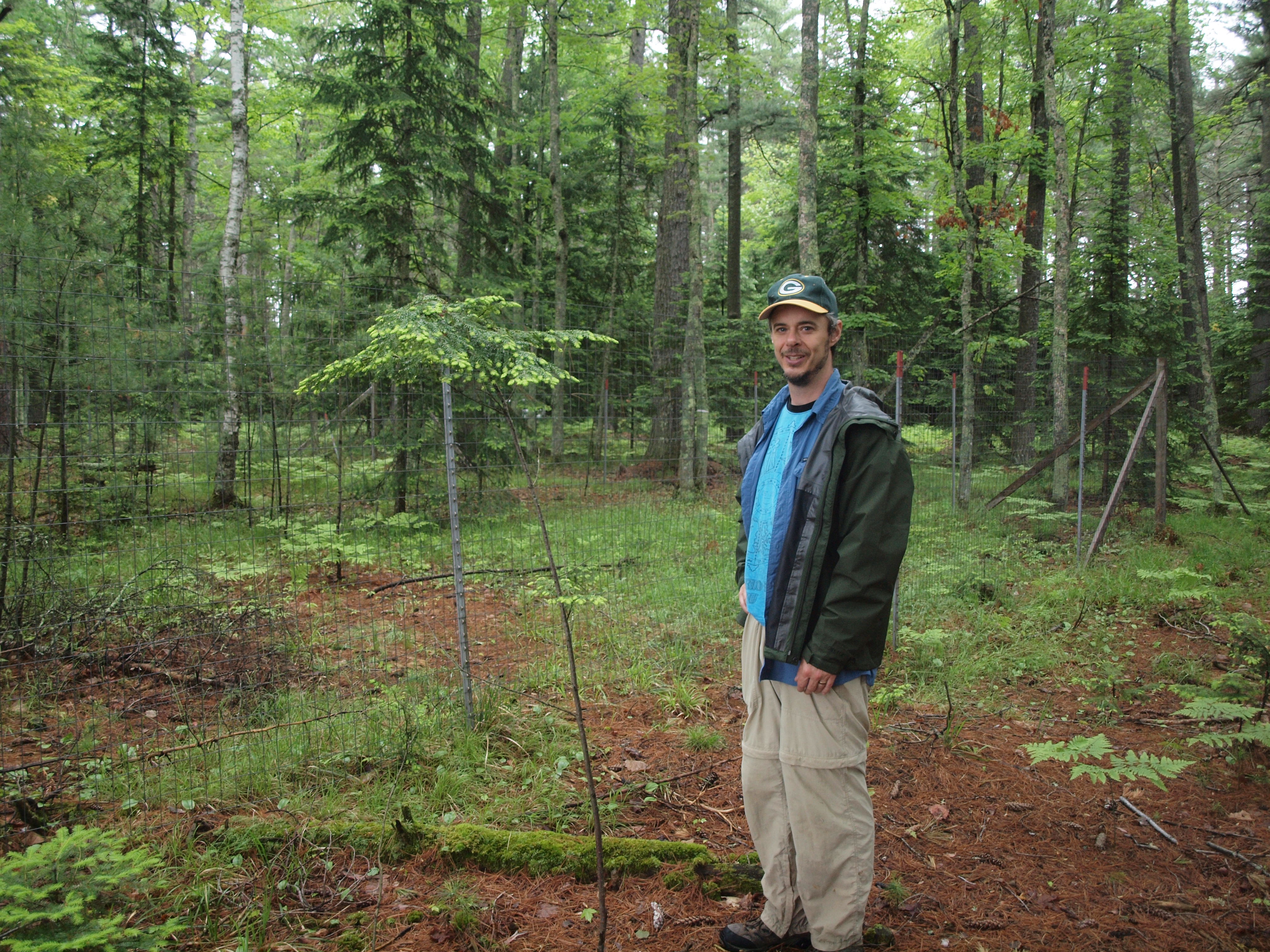 sad little sapling looks like it just hopped out of a Dr. Seuss story.  It’s one long, skinny trunk with a single tuft of needles at the top.  Deer have been hitting this tree hard for a long, long time.  It’s finally tall enough so it’s about to break free and begin growing normally.

After a clearcut, an aspen sapling could reach this height over a single summer.  But this tree is probably older than you are.  The technical term botanists use to describe a tree that’s been browsed in this pattern is “lollipop tree.”  (This describes its shape.  Unfortunately, lollipops don’t actually grow on it.)

Here, Dr. Rooney and I are about to break into a larger exclosure down the road. 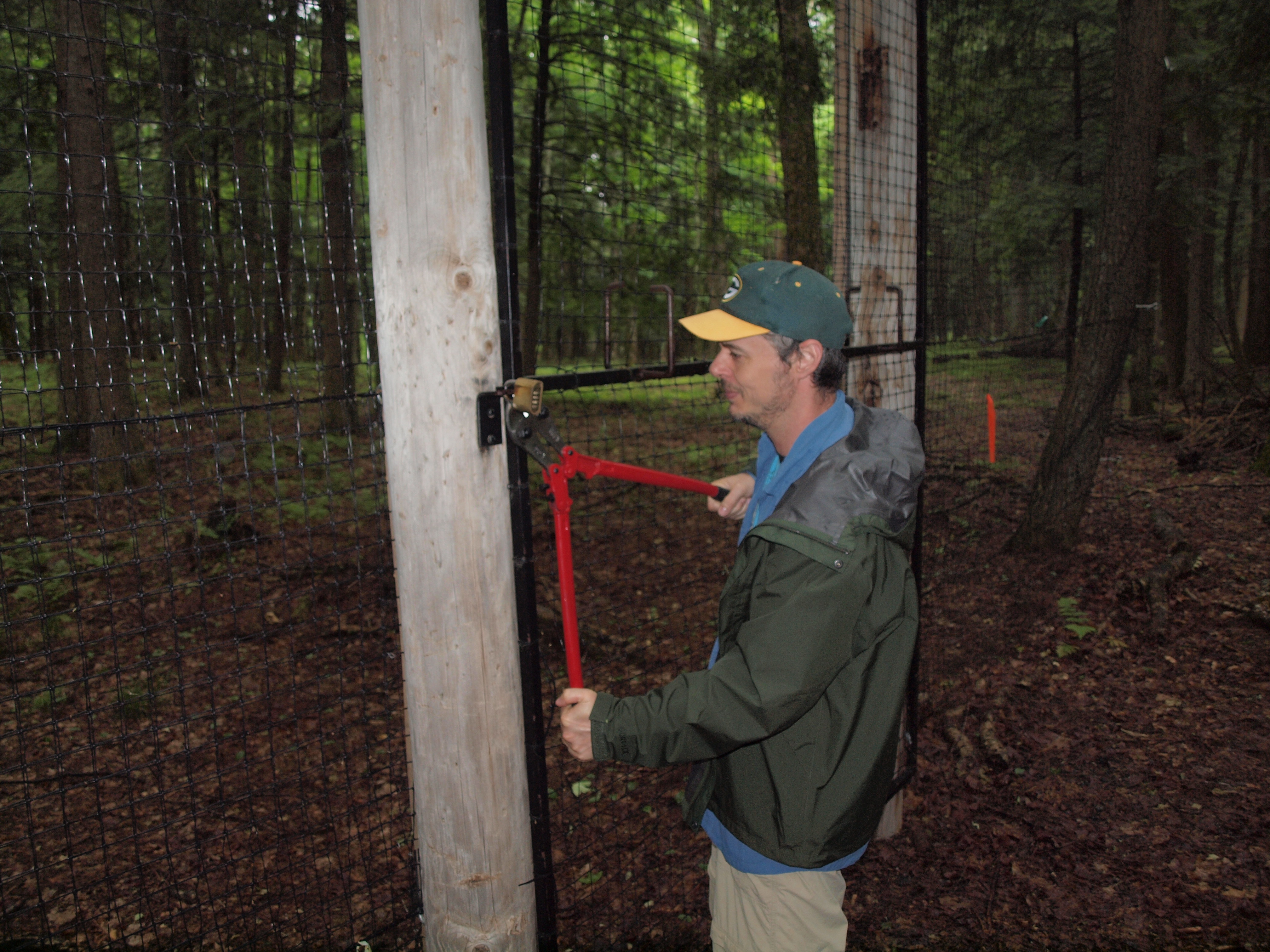 He’d misplaced the key, and we didn’t want to crawl under the fence.  Normally it’s a bad idea to mix botanists, beer, and boltcutters.  But in this case, I made an exception.

Next time: more about the deer of Dairymen’s—how bad things got, why they’re getting better, and what lessons this story holds for the rest of us.