What the heck’s fladry? 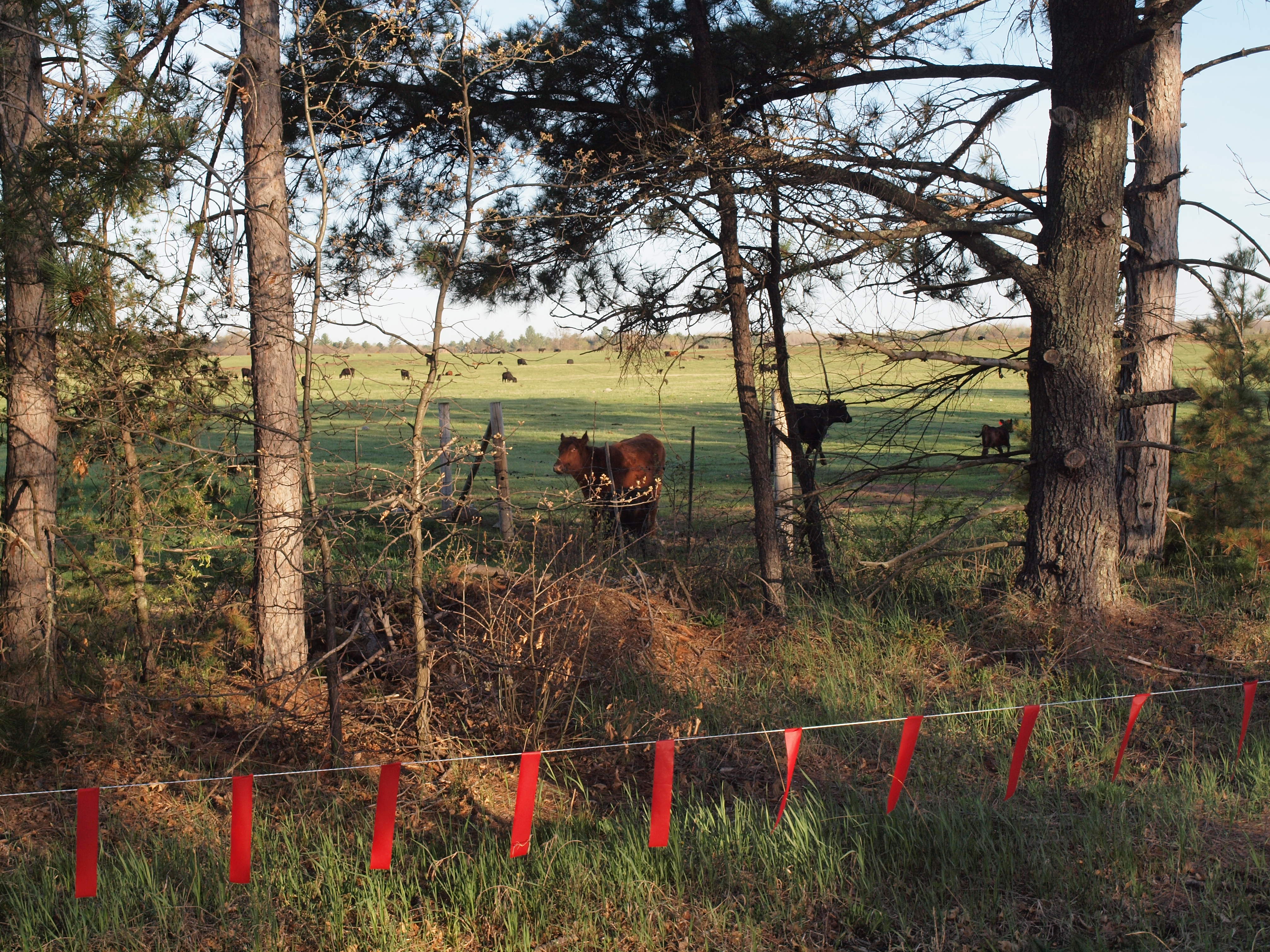 Fladry is an odd, archaic word, one you won’t find in most abridged dictionaries.  And, although it’s pronounced nearly the same, fladry has nothing to do with philandery.  (In any case, this isn’t that kind of a blog.)  It’s from the German word flattern, meaning “to flutter.”  And the more it flutters, the better it works.

Fladry is a string of flags like those in the photo above.  It’s used to contain or exclude wild animals.  It’s not a proper fence, just a string of harmless pennants.  In medieval times, it was used in massive hunts to funnel animals toward waiting hunters.  These days, however, fladry is mostly used to keep animals away.

If you’re interested in wolves and the current delisting debate that’s just getting underway here in the Midwest, you should know more about fladry.  It’s a nonlethal control measure that takes advantage of wolves’ natural wariness and their suspicion of anything new and different in their territory.  The idea is that if can you make your cattle ranch look and sound like a typical used-car dealership, wolves will avoid the place.  Sometimes this actually works quite well—for a while, at least.

The bigger your ranch, the more time and money it will take to install fladry.  Currently, the pasture in the photo has a little over 3 mi. (about 5 km) of fladry strung around its perimeter.  It took a Wildlife Specialist from the USDA two days to install this much, and it probably cost a couple thousand dollars just for the materials.

When I was at the Midwest Wolf Stewards Conference a couple weeks ago, I watched a fascinating presentation about promising research in geospatial techniques for predicting the likelihood of predator attacks on livestock.  Which factors are statistically significant, and which are not?  The answer is complicated, and it involves a lot of mapping and statistics.  But the short version is that a large pasture near small woods and a large wolf pack can often be a risky place to raise cattle or sheep.  (Bigger woods are risky, too.  But they tend to have more deer, so wolves can more easily stick with venison.)

Four days later, on my way to a meeting down in Minneapolis, I drove by a spot just like that.  Even if I hadn’t already heard rumors that this rancher has experienced a number of wolf depredations over the years, the scene definitely would have reminded me of that presentation.  Sure enough, about twelve hours later I drove by on my way home and spotted the fladry that’s in the photo.  Someone else had also put in a long day, too.

As you might guess, fladry works best when it blows and flaps in the wind.  On a still summer night, it’s considerably less effective—especially if the wolves have already had a week or two to get used to it.  (Electrified fladry, sometimes called “turbo fladry,” is only slightly more effective.)  Several scientific trials have yielded results similar to what farmers, ranchers, and wildlife control specialists report from the field.  Fladry alone can keep wolves out for up to 60 days.

But that “up to” part is the problem.  Sometimes, especially when cows are calving and wolves are salivating, fladry only works for a few days.  After that, wolves seem to regard it as a privacy curtain behind which no one will interrupt their dinner.

Similar nonlethal repellent measures include flashing lights and motion-sensing sirens or other noisemakers.  As with fladry, these measures can quickly become ineffective when wolves become habituated to them.

Guard dogs, usually breeds like Anatolian Shepherds and Great Pyrenees, are another nonlethal wolf management technique.  Unfortunately, they’re not as effective against wolves as they are against coyotes.  Wolves are larger, and they tend to travel in packs.

Wolves Eat Dogs.  It’s the title of a 2004 novel by Martin Cruz Smith.  It’s also a recurring headline in my local newspaper.  In all fairness to the wolves, however, most of those dogs are bear hounds invading wolves’ territories at a time of year when they’re raising pups.  When a pack of howling, snarling bear hounds suddenly arrives out of nowhere, wolves can be protective.  (Sorry, bear hunters.  But that’s how the wolves would see it.  Just saying.)

Other guard animals have also been tried.  Believe it or not, some farmers have had remarkable success with donkeys.  These ill-tempered animals seem to have a natural hatred for all canids—including any dogs the farmer already happens to own.  If they see a coyote that isn’t smart enough to leave in a hurry, they’ll chase it down, bite it, kick it, and sometimes stomp it to death.  With wolves, however, the story often ends differently.

The same, unfortunately, is true of llamas.  Great for guarding against coyotes, not so great for wolves.  A couple years back, wolves took a guard llama from a pasture just down the road from here.  It was a family pet whose mutilation was quite upsetting for the children.  Like so many female llamas in America, it was named Dolly.  (I’ve read that His Holiness has quite a sense of humor.  I suspect he finds this trend amusing.)  To the wolves, Dolly may have tasted much like the sheep she’d been guarding.

The moral of these stories?  At the moment, even for wildlife professionals, nonlethal measures like these are usually the only wolf management tools available.  Sometimes they really do work.  Quite often, however, they don’t.

If wolves in the Great Lakes region are once again delisted, wildlife professionals will be back to using lethal control measures when wolves are depredating livestock.  Once these “problem” wolves have been eliminated, people will be more tolerant of the “good” wolves that remain.  They’ll feel less hatred toward wolves, and fewer of them will decide to “shoot, shovel, and shut up.”  In the long run, that’s better for wolves.

This explains why even most wolf advocates are now on record in favor of delisting.  To me, this seems like a pragmatic, realistic view that really makes sense.  Of course, not everyone agrees.  At this very moment, many of those other people and organizations are signing fresh retainer agreements with their law firms.

Here in the Midwest, we now have over 4,000 wolves—more than three times as many as in the entire Rocky Mountain region.  In my county alone, we have more wolves than Yellowstone.  Cows are calving.  We’re now 15 days into the official 60-day comment period.  Wolves, lawyers, and other predators are salivating.  It’s going to be an interesting summer.

The Wolves Came Back: A Delisting Dispatch From the Midwest Wolf Stewards Conference